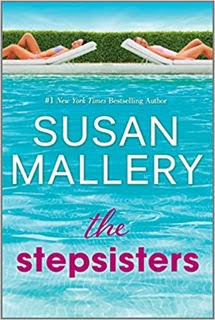 Once upon a time, when her dad married Sage’s mom, Daisy was thrilled to get a bright and shiny new sister. But Sage was beautiful and popular, everything Daisy was not, and she made sure Daisy knew it.

Sage didn’t have Daisy’s smarts—she had to go back a grade to enroll in the fancy rich-kid school. So she used her popularity as a weapon, putting Daisy down to elevate herself. After the divorce, the stepsisters’ rivalry continued until the final, improbable straw: Daisy married Sage’s first love, and Sage fled California.

Eighteen years, two kids and one troubled marriage later, Daisy never expects—or wants—to see Sage again. But when the little sister they have in common needs them both, they put aside their differences to care for Cassidy. As long-buried truths are revealed, no one is more surprised than they when friendship blossoms.

Their fragile truce is threatened by one careless act that could have devastating consequences. They could turn their backs on each other again…or they could learn to forgive once and for all and finally become true sisters of the heart.

“What does that mean?” she asked cautiously.

“So not lovers, but we could be friends?”

The smile returned. “Is my luck that good?”

“A little. But in a gentle, supportive way.”

“Why aren’t you married?”

Sage hadn’t been expecting that. “I’m sorry,” she said automatically. “That’s when you bought the house from your mom.”

“It is. I needed a change of scene, as they say. She had an undiagnosed heart condition. One day she stood up at work, had a heart attack and died.”

“That must have been horrible.”

“I’ve never lost anyone that way,” she admitted. “Through death. The closest would be my dad. He just took off and left me and my mom, but that was a long time ago.”

“It would have been difficult, though.”

“It was. And the divorces.”

“Yes, the race car driver and the Italian husband.” There was also Ellery, but she didn’t talk about him to anyone. “He was a Count. Or Conte, as they say in Italian.”

“Making you a Contessa?”

She laughed. “Yes, that was me for about fifteen minutes.”

“In some ways. His family owns a very old house and a lot of land. There was plenty of history to be found, but also leaking roofs, bad plumbing and a chronic rodent infestation.” She didn’t mention how he dumped her for a slightly older woman with more money than Denmark. A truth that had stung more than a little.

“So only romantic on the outside.” He reached for another taquito. “Do you ever see Daisy?”

Until a few days ago, she would have said not since high school and been happy with that amount of distance. While she could still go the rest of her life without seeing her former stepsister, she knew saying so made her sound awful.

“Just last week. Why? Are you two close?”

“Not at all. I haven’t seen her since high school.”

“Oh, I didn’t know you two were in touch. It’s nice that you stayed friends. She’s great. I always liked her.”

Based on what she’d said, he’d made the logical assumption that she and Daisy still had some kind of relationship and it wasn’t one that involved wishing each other dead. For some reason she couldn’t explain, Sage wanted him to think she was better than she was and now he did. But knowing she’d fooled him didn’t sit well with her and while she was enjoying herself, she knew she couldn’t stay. Not when she was lying about pretty much everything.

She drained her margarita and stood. “This was really nice, Adam. Thank you for inviting me over.” She half expected him to protest her leaving, but he only smiled at her.

“Thanks for coming over.”

She waved and walked through his house and back to her own. When she got to her bedroom, she went to the window and carefully closed the blinds, then sat on the bed and covered her face with her hands.

She could deal with her life being shit—she hadn’t expected any more when she’d moved back. What she hadn’t counted on was the fact that she couldn’t see a way out. Which would have been something she could manage if only she’d been able to pretend that she wasn’t the problem. Because her being the problem implied the only thing standing between her and happiness was herself, and how on earth was she supposed to fix that?

Monday, May 3rd: Book Reviews and More by Kathy

Tuesday, May 4th: Jathan and Heather

Friday, May 7th: The Lit Bitch

Monday, May 10th: From the TBR Pile

Tuesday, May 11th: What is That Book About

Thursday, May 13th: Romantic Reads and Such

Friday, May 14th: View from the Birdhouse

Monday, May 17th: Girl Who Reads

Thursday, May 20th: Why Girls are Weird

Saturday, May 22nd: A Holland Reads