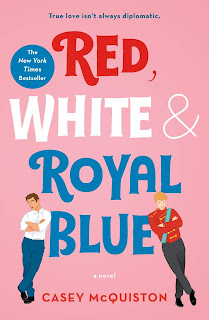 Summary (from the inside flap of the book): When his mother became President of the United States, Alex Claremont-Diaz was promptly cast as the American equivalent of a young royal. Handsome, charismatic, genius--his image is pure millennial-marketing gold for the White House. There's only one problem: Alex has a beef with an actual prince, Henry, across the pond. And when the tabloids get hold of a photo involving an Alex/Henry altercation, US/British relations take a turn for the worse.

Heads of family and state and other handlers devise a plan for damage control: Stage a truce between the two rivals. What at first begins as a fake, Instagrammable friendship grows deeper, and more dangerous, than either Alex or Henry could have imagined. Soon Alex finds himself hurtling into a secret romance with a surprisingly unstuffy Henry that could derail the presidential campaign and upend two nations. It raises the question: Can love save the world after all? Where do we find the courage, and the power, to be the people we are meant to be? And how can we learn to let our true colors shine through?

Review: This is the third book in this genre that I've read recently, the other two were Royal Holiday and Get a Life, Chloe Brown. They have all suited my mood well as we get nearer to the winter holidays, but this one is my favorite of the three. And it was just voted best romance and best debut on Goodreads.

This book is well written, reads quickly, is funny and serious, and has much more depth than I expected. Yes, I knew I was reading a romance about two young men who are leaders in their country, but that happens before the mid-way point so what else is there to cover?! Lots, it turns out.

Now, I'm a Harry Potter fan, so sprinkle a bunch of HP references into a book and you've got me, but this novel also tackles racism, heterosexism, LGBTQ issues, love, politics (both US and UK), women in politics, and friendship. There's lots about friendship and how friends can support (or hinder) one another. There is also a lot of drinking and swearing. Too much drinking for my taste, but that's just me. The main characters are in their early 20s so I just hope when they are older, they cut back. :-)

I liked the characters, each of whom has their strength (charm, data analysis, writing, policy, etc) and they each bring a different perspective on life and the events at hand. If you want a fun read that has more depth than you expected, read this one for sure.