YA Review: Grenade by Alan Gratz 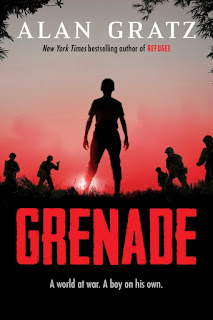 Hideki lives with his family on the island fo Okinawa, near Japan. When World War II crashes onto his shores, Hideki is yanked out of school into the Blood and Iron Student Corps to fight for the Japanese army. He is handed a grenade and a set of instructions: Don't come back until you've killed an American soldier.

Ray, a young American Marine, has just landed on Okinawa with his squad. This is Ray's first-ever battle, and he doesn't know what to expect--or if he'll make it out alive. He just knows the enemy is everywhere.

Hideki and Ray each fight their way across the island, surviving heart-pounding clashes and dangerous attacks. But when the two of them collide in the middle of the fighting, the choices they make in that single instant will change everything.

Review: Alan Gratz really is a master storyteller and this novel is no exception. I knew nothing about the battle of Okinawa during World War II and now feel I have a sense of what it was like for soldiers and civilians alike.

Gratz' use of characters on both sides of the fight allows the reader to understand how Okinawans and Americans felt as they faced each other with rifles and grenades. Both sides committed atrocities and acts of kindness. This story shows that neither side was better or more right than the other.

I also like Gratz' author note at the end that explains to the readers that the terms he has used in the book are not to be used now because they are offensive. He also gives the historical facts of the battle that were not included in his story along with a glossary.