TLC Book Tour Review: Once A Liar by A.F. Brady 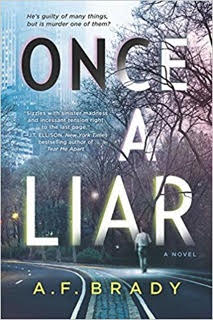 FTC Disclosure: I received a copy of this book from the publisher for a fair review

Summary (from the inside flap of the book): Did he kill Charlie Doyle? And if he didn’t…who did?

Peter Caine, a cutthroat Manhattan defense attorney, worked ruthlessly to become the best at his job. On the surface, he is charming and handsome, but inside he is cold and heartless. He fights without remorse to acquit murderers, pedophiles and rapists.
When Charlie Doyle, the daughter of the Manhattan DA—and Peter’s former lover—is murdered, Peter’s world is quickly sent into a tailspin. He becomes the prime suspect as the DA, a professional enemy of Peter’s, embarks on a witch hunt to avenge his daughter’s death, stopping at nothing to ensure Peter is found guilty of the murder.
In the challenge of his career and his life, Peter races against the clock to prove his innocence. As the evidence mounts against him, he’s forced to begin unraveling his own dark web of lies and confront the sins of his past. But the truth of who killed Charlie Doyle is more twisted and sinister than anyone could have imagined….

Review: Narcissistic, mean, uncaring, what other words can I use to describe Peter Caine? He is not nice. But, I could see glimmers of hope underneath all that nastiness so he was a good main character.

This is a fairly slow moving story, but in alternating chapters (Now and Then), we learn the story of Peter and his relationships with his (now-dead) ex-wife Juliette, his (now-dead) ex-girlfriend Charlie, his semi-estranged son Julian, and his current girlfriend Claire. As the story progresses, we learn more and more about Peter, his personality issues, and what really happened to Charlie and how it all fits in with Peter's job as a criminal defense lawyer.

I definitely kept asking myself what these successful and smart women saw in Peter. Is the lure of a charming, wealthy man so strong that they ignore all the icky? I guess so.

And the ending! I thought I was so clever and had figured out the truth about 50 pages before the ending. And I was wrong. So, good job A.F. Brady


Challenges for which this counts: none