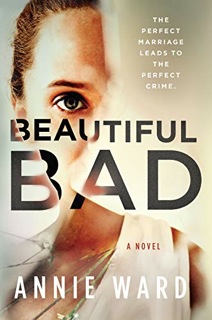 I am excited to participate in the tour for Beautiful Bad by Annie Ward. First, an excerpt (see below) and I will post my review on March 5.

A devoted wife, a loving husband and a chilling murder that no one saw coming.
Things that make me scared: When Charlie cries. Hospitals and lakes. When Ian drinks vodka in the basement. ISIS. When Ian gets angry… That something is really, really wrong with me.
Maddie and Ian’s love story began with a chance encounter at a party overseas; he was serving in the British army and she was a travel writer visiting her best friend, Jo. Now almost two decades later, married with a beautiful son, Charlie, they are living the perfect suburban life in Middle America. But when a camping accident leaves Maddie badly scarred, she begins attending writing therapy, where she gradually reveals her fears about Ian’s PTSD; her concerns for the safety of their young son; and the couple’s tangled and tumultuous past with Jo.
From the Balkans to England, Iraq to Manhattan, and finally to an ordinary family home in Kansas, sixteen years of love and fear, adventure and suspicion culminate in The Day of the Killing, when a frantic 911 call summons the police to the scene of a shocking crime.

MADDIE
Ten weeks before
Her eyes keep coming back to the top left corner of my face. She looks away toward the window, out over the manmade neighborhood pond visible from her home office, but then it’s right back to the place where I’ve been sewn back together.
I don’t know how this is going to work. On her website she says she is “above all a nonjudgmental, compassionate and discreet psychologist accomplished at using writing therapy to address anxiety.” For fuck’s sake then, stop staring. I’ve told her I’m here because I’d like to feel less nervous.
She smiles at me. That’s better. She says, in a lilting infomercial voice, “There are many, many extremely helpful exercises used in writing therapy. What I love most about it is that you can explore as far and wide and deep as your imagination and inhibitions will allow. We’ll try a variety of approaches and see—” she tilts her head to the side in a way that is at once obviously rehearsed and yet strangely attractive “—see what works best for you, Maddie.”
I nod, and the hair I wear pulled over the left side of my face must move a little. She’s playing it very cool, but her fascination is evident. I’m not surprised. The bruise has faded but the whole mess is still pretty shocking.
I feel discouraged. I need this to work, but this woman is not what I expected. It was important to me that I do writing therapy, and there were not all that many choices in my area. When I chose Dr. Camilla Jones, with her private practice in Overland Park, I pictured a lady in a sophisticated suit and some grandmotherly pumps. Kind eyes. Silver hair.
This woman, this Camilla, has told me that her name rhymes with Pamela. What? Instead of Dr. Jones, she wants me to call her Cami J. She is dressed in a loose, floral off-the-shoulder T-shirt, yoga pants and a baseball cap. I hate to be shallow, but I have to point out that there are rhinestones all over the front of her cap. All over. Everywhere. It’s probably as hard for me not to gawk at her cap as it is for her not to gawk at my face. The focal point on this cap is a giant rhinestone fleur-de-lis. This troubles me. She’s got be in her early sixties even though she looks fucking great. Honestly, though, I just didn’t want my psychologist to remind me of a Zumba instructor.
Finally she is looking me in the eyes. “Maddie?”
“Yes?” I don’t know why but I am clenching my fists, then opening them, then clenching them again. I used to get carpal tunnel syndrome from all the writing, and I would do this when my wrists were sore. I stop.
“Let’s cut to the chase and start easy. I want you to write down twenty things that set off your anxiety.” She passes me a piece of lined notebook paper and a pen. “Try not to think too much about it. Just what scares you or makes you sad or nervous. Write the first things that pop into your head, okay?”
“Okay.”