Review: The War Outside by Monica Hesse 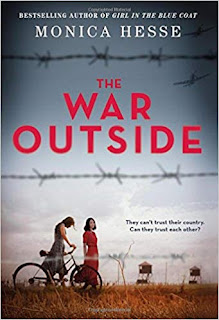 Summary (from the inside flap of the book): 1944. Crystal City, Texas. Margot gave up everything to keep her family together. And now they are together--imprisoned in the Crystal City family internment camp, worlds away from their German-American farm community in Iowa. But the camp is changing them, day by day and piece by piece. As Margo watches her mother's health deteriorate and her loving, patriotic father turn into a man who fraternizes with Nazis, she wonders what more it will take to keep her family whole.

Haruko tries to maintain a facade of serenity in Crystal City, making friends at high school and shopping in the general store. Yet Haruko feels anything but serene, suffocated by dust, heat, and her deepest fears: that her own father is hiding something from her, and that her soldier brother, fighting in the Japanese-American unit of the US Army, is hiding something from everyone.


After a dust storm throws Haruko and Margot together, the two strike up an unlikely, secret friendship. Their time together becomes a gift and a refuge--but in a desert prison camp that presents a pale imitation of life, can anything so real and fragile survive?

Review: I have read so many world war II books, but not very many set in the US internment camps so I was looking forward to this one. And it's written by Monica Hesse who did such a good job with Girl in the Blue Coat.

I love it when authors have a note at the end of a historical novel telling which parts are true (many of them in this story) and which are not (the idea of the girls' friendship). Learning that there really was a camp in Crystal City, TX where Germans and Japanese (and Italians) were kept together is so interesting. They were not rounded up because of their nationality, but rather because there was "evidence" of spy work. But how odd that their families joined them voluntarily.

The story seems slow to me, picking up only at the end. Not necessarily slow in a bad way, but more like a study of life in the camp. It felt only plot driven near the end when all the pieces came together in a crescendo.

As an aside (and on a totally different subject), Hesse wrote a disturbing but wonderful article about sexual assault in the Washington Post.