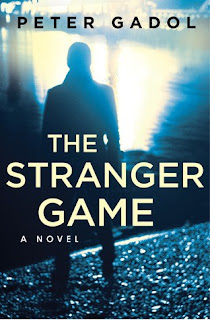 FTC Disclosure: I was given a copy of this book for a fair review as part of a TLC Tour

Summary (from the inside flap of the book): Rebecca's on-again, off-again boyfriend, Ezra, has gone missing, but when she notifies the police, they seem surprisingly unconcerned. They suspect he has been playing the "stranger game," a viral hit in which players start following others in real life, as they might otherwise do on social media. As the game spreads, however, the rules begin to change, play grows more intense and disappearances are reported across the country.

Curious about this popular new obsession, and hoping that she might be able to track down Ezra, Rebecca tries the game for herself. She also meets Carey, who is wiling to take the game further than she imagined possible. As her relationship with Carey and involvement in the game deepen, she begins to uncover an unsettling subculture tha has infiltrated the world around her. In playing the stranger game, what may lead her closer to finding Ezra may take her further and further from the life she once lived.

Review: I think the premise of this novel is really good: the stranger game is where people follow strangers. Yes, it's stalking. But it's temporary (like, for an hour or so) and you never follow the same person twice or interact with them. Those are the rules. But what if people stop following the rules?

What if people follow the strangers for days and begin to break into their houses (but not steal anything)? What if the following begins to spread and it's a group effort? That would be bad. And it is.

My problem is that I didn't connect with the characters. I didn't learn enough about how they are, rather I know what they do and what happens to them. I wanted more. But I also found myself thinking about how this book is such a good commentary on today's social media. We follow people we don't know, for years. We feel like we know them. And we're obsessed with them. Maybe I need to unfollow some people.