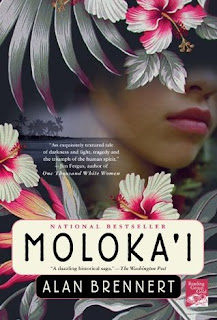 Summary (from the back of the book): Rachel Kalama, a spiritied seven-year-old Hawaiian girl, dreams of visiting far-off lands like her father, a merchant seaman.. Then one day a rose-colored mark appears on her skin, and those dreams are stolen from her. Taken from her home and family, Rachel is sent to Kalaupapa, the quarantined leprosy settlement on the island of Moloka'i. Here her life is supposed to end--but instead she discovers it is only just beginning.

Review: Oh, I learned so much from reading this book! And not only did I learn a lot, but I was swept up into the lives of the people living with (and dying of) leprosy on Moloka'i as well as their families that they left behind.

In the latter half of the 1800s, Hawai'ians who came down with leprosy were shipped off to the island of Moloka'i to a leper colony and never allowed to return to their families. Many of those people were adults, but there were also a large number of young children who were taken from their families, never to see them again. The author did extensive research, using some real people and some composites of real people as the basis for this novel. He also used real laws, rules, and policies that governed the lives of those exiled (and the nuns, priests, and doctors who tended them) from the 1870s through to the present.

I found the historical aspects of this book fascinating and frightening. At the same time, I wanted to know more about the life Rachel lived on Moloka'i. Would she ever see her family again? Can someone who is exiled to an island lead a "normal" life, and what does that mean to each of us? I was definitely invested in Rachel, her friends, her love interests and the lives of the secondary characters as well.