Review: Salt to the Sea by Ruta Sepetys 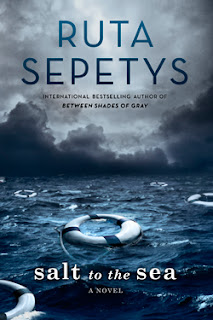 Summary (from the back of the book): Winter, 1945. Four teenagers. Four secrets. Each one born of a different homeland, by tragedy, lies...and war. As thousands of desperate refugees flock to the coast in the midst of a Soviet advance, four paths converge, vying for passage aboard the Wilhelm Gustloff, a ship that promises safety and freedom. Yet not all promises can be kept.

Review: Another really good book by Ruta Sepetys. A while back I read her other novels, Between Shades of Gray and Out of the Easy, both of which were fantastic. She is just so good at weaving a story and connecting it to a historical time period.

Not only is this novel set during the final months of World War II in Europe, but it is based on a real event: the greatest tragedy in maritime history. I had never heard of this flood of people to the Baltic coast, the evacuation of tens of thousands to freedom outside Poland, the escape from the Soviet invasion, and I certainly never heard of the sinking of these ships. The author definitely did her due diligence in researching individual people who were on the ship (some of whom survived and some of whom did not).

And the story is one that is really well told. I liked all the characters in the traveling group and enjoyed that each short chapter (1 to 3 pages) were narrated by 4 different characters. I love getting those different perspectives on the same story.