Review: More Happy Than Not by Adam Silvera 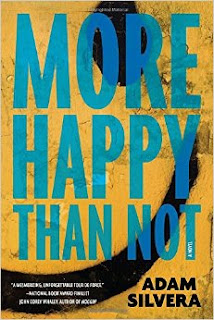 Summary (from the back of the book): The Leteo Institute's revolutionary memory-relief procedure seems too good to be true to Aaron Soto--miracle cure-alls don't tend to pop up in the Bronx projects, Aaron could never forget how he's grown up poor, how his friends aren't there for him, or how his father committed suicide in their one-bedroom apartment. Aaron has the support of his patient girlfriend, if not necessarily his distant brother and overworked mother, but it's not enough.

Then Thomas shows up. He has a sweet movie-watching setup on his roof, and he doesnt' mind Aaron's obsession with a popular fantasy series. There are nicknames, inside jokes. Most importantly, Thomas doesn't mind talking about Aaron's past. But Aaron's newfound happiness isn't welcome on his block. Since he can't stay away from Thomas or suddenly stop being gay, Aaron must turn to Leteo to straighten himself out, even it if means forgetting who he is.

Review: Such an interesting book! On the surface the story deals with race, friendship, sexuality, and poverty, but below that is the idea of forgetting.

Aaron is a character that I wanted to hug; to make him realize he is okay the way he is. But Aaron isn't okay with the way he is; he wants to be straight. He wants his dad back. Sort of. He wants a better apartment. He wants his mom to not have to work so hard and his brother to like him more. He wants his friends to be friends without all the drugs and fighting. But that isn't going to happen. Most importantly, Aaron wants to be happy and he thinks if he is straight everything will work out. But we all know that isn't the way things work.

How can teenagers become okay with who they are? It's difficult to do that when you feel like your family and friends don't support you. But is having your memory erased the answer? The Leteo Institute thinks so. At first I thought this was a strange aspect to this book. But as the story continues and more is revealed, it makes a little more sense and really makes the story complete.