Review: The Edge of the Water by Elizabeth George 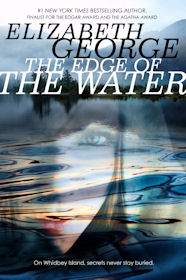 Summary (from the inside flap of the book): A mysterious girl who won't speak, a coal-black seal named Nera that returns to the same place every year, a bitter feud of unknown origin--strange things are happening on Whidbey Island, and Becca King is drawn into hte maelstrom of events.

But Becca, first met in The Edge of Nowhere, has her own secrets to hide. Becca is living in a hidden location. Even Derric, the Ugandan orphan with whom Becca shares a close, romantic relationshipo, can't be allowed to know her whereabouts. As secrets of past and present are revealed, Becca becomes aware of her growing paranormal powers, and events build to a shocking climax anticipated by no one.

Review: I do like me a good series and this one is turning out to be fun! I look forward to reading the third installment, which my school's library recently received.

Becca is such an interesting character and I liked getting to know her in the first book. I feel like I got to know her even better in this second book, but I also got to know many more of Whidbey Island's inhabitants, which is great! The characters are varied and interesting, each one bringing a little something new to the story and the island's personality.

The first book hinted at a bit of paranormal activity. No, wait. It doesn't really feel like paranormal activity, but rather a couple people having a "sixth sense." That storyline is starting to grow and take shape; I can't wait to see what happens with that in book three. We are also starting to learn more about Becca, her back story and that of people close to her.

All in all I enjoyed this second installment and will be taking the third on my winter vacation this year.

Email ThisBlogThis!Share to TwitterShare to FacebookShare to Pinterest
Labels: 4.5 Stars, Mystery, YA