Review: The Illusion of Innocence by Jacqueline Jacques 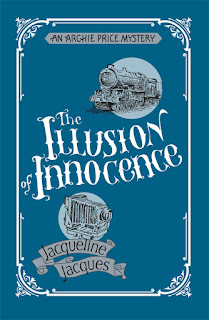 FTC Disclosure: I received a copy of this book from the publisher for review

Summary (from the inside flap of the book): Three people on a crowded train, brought there by the same crime. Archie Price, painter and police artist, blessed with a photographic memory, is traveling to Chelmsford to testify in a murder trial. The accused, Freddie Porter, is under police escort in the guard's van. Freddie's sister, Polly, is desperately trying to escape her brother's gang before they realize what she's done, unaware he's on the same train. When the locomotive is derailed, Archie and Polly are injured, and put up by the same local family while they recover. Where is Freddie? Polly is so terrified she is driven to desperate measures and Archie finds himself being drawn into her nightmare....

Review: Trish at TLC Book Tours knows that I love mysteries and she always seems to find ones that suit me. Thank you Trish! This one promised to be right up my alley as it is a historical mystery set just outside London in the late 1800s. I was mostly pleased.

Victorian England is such a complicated time: our perception is that everyone behaved themselves and followed Queen Victoria's example of prudish behavior, but in reality, there were women seeking the vote and a stronger voice in society and there were seedy underpinning that sought to control women and degrade them. These nasty attitudes are brought to light in this novel when we find our antagonist, Freddie, stealing pornographic photos. In the early era of photography, pornography certainly had its place. But these photographs are sick. Yes, there are women who chose to pose, but many of the women in the photos in this novel were raped, murdered, and forced to be photographed.

The other side of photography is Polly. She is a strong female character who is striking out on her own as a young woman and opening her own photography business. She is trying to avoid her adopted brother Freddie at all costs, but that is proving quite difficult. After the train accident she takes on a new identity, seems to be falling for Archie, and is fighting to survive.

I liked the characters of Archie and Polly and hated Freddie. I suppose that's the way it's supposed to be. I found beginning of the book slow to pull me in, but by the end was glad that I had read this book.