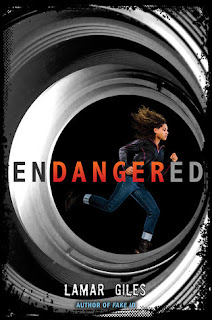 Summary (from the inside flap of the book): Her name is Lauren, but everyone calls her Panda. What they don't know is that behind their backs, she also goes by Gray. As in Gray Scales, the photoblog that her classmates are addicted to because of the secrets Gray exposes: a jock buying drugs, a teacher in a compromising position, a rich girl shoplifting. But no one knows Panda's the vigilante photographer behind it all. At least, she thinks no one knows--until she gets a note from the Admirer, who's not only caught her redhanded acting as Gray but also threatens to reveal everything unless Panda plays a little game of Dare or ... Dare.

Panda plays along. Anything to keep the secret she's protected for years. But when the game turns deadly, Panda doesn't know what to do. And she might need to step out of the shadows to save herself...and everyone else on the Admirer's hit list, including some of the classmates she's loathed and exposed for years.

Review: I like a good mystery and this book definitely had that. I also think the story could resinate with teens because it draws on the feelings of high school bullies, those that we feel deserve karma payback, and wanting revenge when someone makes you feel "wronged." In that way the book is realistic. However, there are some aspects that seem far-fetched and I haven't decided if I am okay with that yet.

I think my favorite thing about this book is the feelings it evokes. Panda really feels like she is doing the right thing by exposing the "mean" people at her high school for what they are: the bully is shown doing drugs, the mean-girl is shown in a compromising situation, etc. But what damage does she do by exposing them? She didn't really think about that aspect of it. While she sees herself as a vigilante, many see her as cruel. Thinking about the motivation behind our actions is an important theme of this story.

I also like the look into friendships. What happens when you stop dating someone? Do you remain friends, ignore each other for ever? Hold a grudge? What if that person comes back to help? And best friends share everything. Panda's best friend is always there for her, until Panda is outed as Gray. Panda cannot believe her best friend's reaction and feeling alone isn't so great. I think a lot of teens go through similar situations with friends: we aren't always sure what went wrong and we don't know how to fix it.