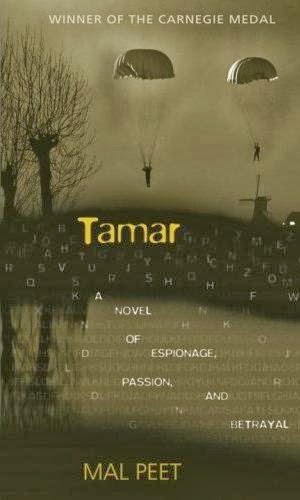 Summary (from the inside flap of the book): In the terrible "Hunger Winter" of 1944, two undercover operatives parachute in Nazi-occupied Holland. They are spies for the Allied forces, sent to provide support for the Dutch resistance movement. Half a century later, a fifteen-year-old girl named Tamar inherits a box from her grandfather containing a series of clues and coded messages. Out of the past, another Tamar emerges--a man involved in the terrifying world of resistance fighters--and she is his namesake. His story is a complex one of passionate love, jealousy, and tragedy set against the daily fear and casual horror of the Second World War. Unraveling it will transform Tamar's life.

Review: I have read a lot of books about World War II, but none like this one. Yes, this is a book about the Dutch resistance and that part is interesting as we read about sending coded messages to London, trying to sabotage the Nazis, hiding in people's houses in plain sight, and gathering intelligence.

However, there is really so much more to this novel. It is also about the human spirit, love, living dangerously, and family. And the past. Unfortunately, it took me way too long to read this book. I think I wasn't in the mood for something serious and so I read two other books in between that were lighter. I wish I had been in the right mood from the start and the book would have felt more connected for me. Because once I got going on this book a few days ago it really started to gel and "work" for me.

I got quite involved in the characters and know they will stay with me for a few days, worming their way into my thoughts as I go about my day. Tamar (the man in WWII) is kind, thoughtful, loving, and full of hate and fear. Ernst, his partner, is terrified, angry, unsure and jealous. Tamar (the girl in London) is curious, young, and out for adventure. The secondary characters are super important in this book and are actually more well rounded than most books.

And the ending. I cannot say anything about it because it will ruin the whole thing for you, but the ending is... wow! The ending is 5 stars out of 5.