Review: The Fall of Five by Pittacus Lore 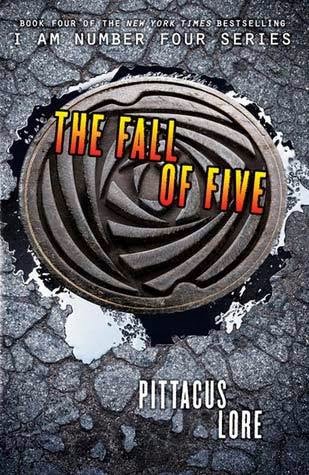 Summary (from the inside flap of the book): I thought things would change when I found the others. We would stop running. We would fight the Mogadorians. And we would win. But I was wrong. Even though we have come together, we barely escaped from the Mogadorians with our lives. And now we're in hiding, trying to figure out our next move. The six of us are powerful--but we're not yet strong enough to take on their entire army. We haven't discovered the full extent of our Legacies. We haven't learned to work together. And there's still so much that we don't know about the Elders or their plan for us. Time is running out, and there's only one thing we know for certain: We need to find Number Five before they do.

Review: Spaceships, aliens, fighting with blasters and Legacies (special powers), and using telekenesis to move objects. These books are so not my kind of thing, but I keep reading them each time a new book in the series comes out. And I don't really know why. Well, I do. They are fun to read!

I now know the characters well by now: Numbers 4, 6, 8 and 9 and Ella (is she #10?). Then there's Sarah and Sam, the humans (and Sam's dad shows up in this book, which is really cool). The Mogadarians don't get names or personalities since they are the bad guys, except the head Mogadarian and Adam who appears in this book. Can we trust him? There are some love interests in the group and there is definitely the issue of trust as well.

The truth of the matter is that I am a sucker for a story. I am one of those people who will watch a bad Lifetime movie on TV just to see how it all turns out so these books have me hooked. The author doesn't even pretend to wrap up a book, but stops mid-action so you'll read the next one. Very clever. And really, what's more exciting than a band of teenagers with super powers trying to save the Earth and their own planet from evil?

This installment in the series definitely gives us some background information about why these aliens are on Earth and what their job is now that they are here. There is also a huge reveal about one of them, which I won't talk about since it would spoil the book for you.

So even if you aren't a science-fiction geek/nerd, this series of books is really fun. The books in the series are:


There are also a number of spin-off books that fill in the back stories of Sam, Adam, Lorien (the alien planet), and other aspects of the main series.

Email ThisBlogThis!Share to TwitterShare to FacebookShare to Pinterest
Labels: 4 Stars, Science-Fiction, YA