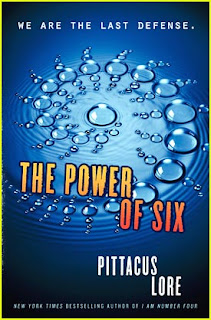 Title: The Power of Six

Author: Pittacus Lore
Genre: YA Science Fiction
Pages: 406
Rating: 4.5 out of 5
Challenges:
FTC Disclosure: I borrowed this from my school library
Summary (from Amazon): I've sen him in the news. Followed the stories of what happened in Ohio. John Smith, out there, on the run. to the world, he's a mystery. but to me... he's one of us. Nine of us came here, but sometimes I wonder if time has changed us--if we all still believe in our mission. How can I know? There are six of us left. We're hiding, blinding in, avoiding contact with one another... but our Legacies are developing, and soon we'll be equipped fight. Is John Number Four, and is his appearance the sign I've been waiting for? And what about Number Five and Six? Could one of them be the raven-haired girl with the stormy eyes from my dreams? THe girl with powers that are beyond anything I could ever imagine? The girl who may be strong enough to bring the six of us together?

They caught Number One in Malaysia. Number Two in England. And Number Three in Kenya. They tried to catch Number Four in Ohio--and failed. I am Number Seven. One of six still alive. And I am ready to fight.

Review: I think I liked this book even better than the first one, I am Number Four. I feel like I got to know the characters better and I liked that we met more of the Garde members. Through meeting numbers Six, Seven, and Nine we also get to know more about Lorien, the history of the war with the Mogadarians, and the Garde themselves.

I also really enjoyed reading the story from two perspectives, that of Number Four and of Number Seven who is in Spain. Number Seven's experiences are so different from those of Number Four that it really filled out the story. With the addition of Number Six we get some romance going, which is cute and doesn't distract from the main story. I also liked the new information we get about Sam, which I am not going to reveal here. You'll have to read the book yourself to find out about it.

As with the first book I didn't love the fight scenes, they just aren't my thing, but I understand that they are a necessary part of the story. I am excited to read the third installment, The Rise of Nine (unfortunately, it won't be released until August 2012)! 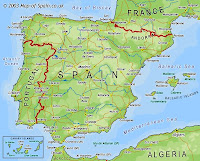 (Number Seven lives in a Spanish convent/orphanage)
Click to see my updated Google Map. This book takes place in two locations, sort of. Half the book is in Spain and the other half is in various locations around the United States (Pennsylvania, Tennessee, West Virginia mostly). I don't have anything in Spain on my Google map so that's what I am going for since at least half the book takes place there.