Review: The Rise of Nine by Pittacus Lore 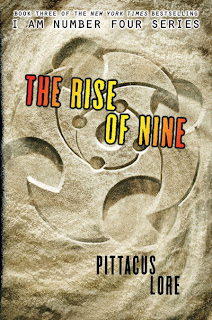 Title: The Rise of Nine

Summary (from Amazon): Until the day I met John Smith, Number Four, I'd been on the run alone, hiding and fighting to stay alive. Together, we are much more powerful. But it could only last so long before we had to separate to find the others.... I went to Spain to find Seven, and I found even more, including a tenth member of the Garde who escaped from Lorien alive. Ella is younger than the rest of us, but just as brave.Now we're looking for the others--including John.

But so are they. They caught Number One in Malaysia. Number Two in England. And Number Three in Kenya. They caught me in New York--but I escaped. I am Number Six. They want to finish what they started. But they'll have to fight us first.

Review: I have been in such a reading rut the last couple of months, it feels great to finish a YA book!This is the third book in the I am Number Four series (following I am Number Four and The Power of Six). The series is fun and this book definitely finishes with the reader knowing that at least one more book is on the horizon. I hope it's just one more as it will start to feel stretched out if it goes for more than four total. There is also one more book, consisting of three novellas, that give the background stories of some of the other "numbers."

It was fun to have chapters told from different Garde members' perspectives; John (Number Four); Number Six; and others all get a turn at giving their viewpoint of events. I also liked learning about their legacies (seeing in the dark, breathing underwater, telekenisis, teleporting, and more). I think I'd like to be able to teleport, especially given the effort it take to fly these days.

I will confess that the fighting scenes don't really do it for me, it feels like I am in a video game, something I have never enjoyed. But, teenagers who like gaming will probably love the fight scenes and they are the ones that the book is aimed at so it is "all good."