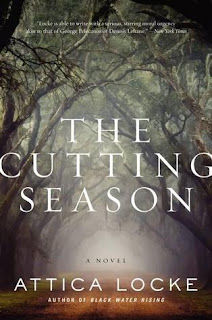 
FTC Disclosure: I received a free copy for review

Summary (from Amazon): For many native Louisianans, Belle Vie, a large antebellum plantation situated between Baton Rouge and New Orleans, is a symbol of beauty and the South's genteel past. For others, it is a monumental reminder of the evils of slavery. The estate becomes the center of further controversy when a young woman is found lying facedown in a shallow grave, her throat cut clean.

It doesn't take long for the police to start compiling suspects. Was it an angry homegrown laborer venting his rage at the migrant workers displacing the locals who've worked in the can fields for generations? Or was it someone striking out against Groveland, the predatory corporation buying up the area's small family farms?

When the investigation takes an unsavory turn, the estate's manager, Caren Gray, is left with suspicions of her own. The search will plunge her into the murky waters of the plantation's history--into a centuries-old mystery involving the plantation's slave quarters--and deep into her own past. But the further she digs, the more she realizes that the truth isn't as simple as it seems...and that a killer may be closer than she ever could have imagined.

Review: I read Attica Locke's previous novel Black Water Rising and gave it 4 stars so was looking forward to reading her newest book. However, given my current state of non-reading I really had a tough time getting into this book. I don't know if it was me or the book, but I found the beginning just wasn't working for me.

Then I got to a bit before half way and something clicked. All of a sudden the setting, the characters, and the plot fell into place for me and I raced through the second half of the book, staying up late to finish it and find out who the killer is. The mystery of this novel is really well done; I didn't know who did it until just before the character figures it out and I really like it when that happens. There were so many possibilities of a solution, and the truth sat well with me when all was said and done.

There are a lot of characters in this book, from Caren, the planation manager, her family members, the plantation staff, sheriff/police, reporters, landowners, cane workers, and more. I think that might be what got me confused in the beginning of the book, I wasn't really sure who was whom. But, as I said earlier, it all comes together and I realized the vital role each of those characters played in what was unfolding. I don't know that I "like" Caren, but I understand her. She is trying to raise her daughter, support herself, preserve part of Louisiana's (and her own) past, and keep it all together. And it's a lot. It's overwhelming. And there's a murder, and lying politicians, and scheming law enforcement....

One of the most interesting aspects for me was the planation history that is intertwined with Caren's family history (and parallels the current mystery at the center of the book). I found out much that I didn't know about how plantations worked both before and after the US Civil War. So, if you are interested in a good mystery and a little history, this is the book for you.