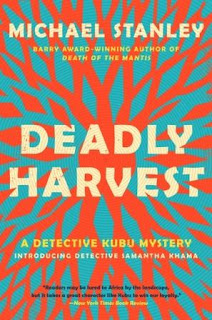 
FTC Disclosure: I received a copy of this book for review through TLC Tours

Summary (from the back of the book): A young girl goes missing after getting into a car with a mysterious man. Soon after, a second girl disappears, and her devastated father, Witness, sets out to seek revenge. As the trail grows cold, Samantha, a new detective (and the only woman) with the Botswana police force--is reminded of a childhood friend who had gone missing, and she devotes herself to keeping the first case open. She suspects that the girl was killed for muti, the traditional African medicine usually derived from plants and sometimes animals. But recent evidence shows that the human parts are being incorporated into certain potions to conjure up a supposedly more potent formula. Detective Kubu joins forces with Samantha to take the investigation to the next level.

Meanwhile, Witness is convinced that his daughter, too, was murdered for muti--for a potion to ensure an election victory for opposition leader Marumo. On the night of Marumo's win, Witness waits outside the politician's home and murders him before fleeing town. Now Kubu and Samantha have yet another murder investigation on their hands, and the search of Marumo's home yields a sample of muti that confirms their worst fears: the formula includes traces of human DNA and remains. Kubu and Samantha are thrust into a harrowing race to stop a serial killer or killers-and those who would pay for their special, lethal muti.

Review: This is the second Michael Stanley novel I've read, the first being The Death of the Mantis, which I enjoyed as well.

One of the things I like the most about these books is the setting and the things I learn from them. The book is set in Botswana and the authors are really good at including cultural and factual information about the country and the people. This book emphasized AIDS, AIDS orphans, the witch doctors and muti.

Muti is the the spells created by witch doctors that include herbs, animal parts, and in rare cases, human remains. The human remains work best when gotten from a live person, supposedly giving the keeper of the muti more power. This is crazy! But, apparently this is a real problem in Botswana.

The story is really compelling with lots of interesting characters, fascinating culture, a great mystery, and some real surprises. I stayed up late to finish this book and am so glad that I did! The end was gripping and has stayed with me for days.