Review: The Death of the Mantis (Michael Stanley) 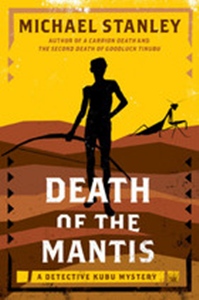 Title: The Death of the Mantis

Author: Michael Stanley
Genre: Adult Mystery
Pages: 421
Rating: 4.5 out of 5
Challenges: Mystery and Suspense, PoC
FTC Disclosure: I received a copy of this book as part of a TLC Tour
Summary (from the back of the book): In the southern Kalahari area of Bostwana--an arid landscape of legends that speak of lost cities, hidden wealth, and ancient gods--a fractious ranger named Monzo is found dying from a severe head wound in a dry ravine. Three Bushmen surround the doomed man, but are they his killers or there to help? Detective David "Kubu" Bengu is on the case, an investigation that his old school friend Khumanego claims is motivated by racist antagonism on the part of the local police. But when a second bizarre murder, and then a third, seem to point also to the nomadic tribe, the intrepid Kubu must journey into the depths of the Kalahari to uncover the truth. What he discovers there will test all his powers of detection... and his ability to remain alive.

Review: I haven't read a book set in Botswana since The Number On Ladies Detective Agency so I was excited when Trish from TLC Book Tours asked me to join this tour! And, though the book began slowly for me, in the end, I wasn't disappointed.

Kubu is a very likable and believable character as is the large cast of secondary characters (his wife, her sister, his boss and his colleagues). What I really liked is that we get to know Kubu not just as a detective, but as a person. He struggles with his weight (he weighs 300 pounds), he loves his wife and daughter dearly, and he is loyal to his friends. In addition the dialogue seems real, something that is very important to me when reading, especially since so many mysteries get that short choppy sentence structure that just doesn't work for me.
The setting of the book is also interesting. I must confess that my knowledge of the Kalahari Desert and the Bushmen comes only from the movie The Gods Must Be Crazy (a really fun film, by the way), which I know is pathetic. I should do more research. However, the authors did a great job of showing the reader the differences and issues between the black Botswanans and the Bushmen. I also feel like I learned a bit about Bushman culture, which for me is always a good thing in a book.

The story itself is well told with secrets slowly revealed, events happening at a good pace, and a fine mixture of "detective" event mixed in with the personal. And, I didn't figure out "who done it" too early either! 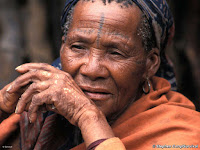 (photo credit for the Bushman image)

Click to see my updated Google Map. A book set in Botswana is a great addition to my Google Map, especially when it's a good book where I learn about the country. So very different from Alexander McCall Smith's series, too, which is good because I gained new perspective on the country.