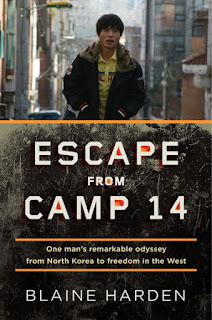 Title: Escape from Camp 14: one man's remarkable odyssey from North Korea to freedom in the west

Summary (from the back of the book): North Korea's political prison camps have existed twice as long as Stalin's Gulags and twelve times as long as the Nazi concentration camps. No one born and raised in these camps is known to have escaped. No one, that is, except Shin Dong-hyuk. Blaine Harden unlocks the secrets of the world's most repressive totalitarian state through the story of Shin's shocking imprisonment and his astounding getaway. Shin knew nothing of civilized existence--he saw his mother as a competitor for food, guards raised him to be a snitch, and he witnessed the execution of his mother and brother.


Review: I knew next to nothing about North Korea until I read Guy Delisle's Pyongyang and Barbara Demick's Nothing to Envy, which got me really interested in how a nation can be convinced that their way is the right way when they suffer daily on a very deep level. Escape from Camp 14 gave me another look into North Korea, from inside a labor camp.

North Korea is just disturbing, there is no other way to say it. And, to hear about the country from someone who didn't even really know the country (all he knew was the camp since he was born there) is even more staggering. In order to survive, Shin must tell on family and classmates, he must scramble for food, he barely learns to read or write, knows nothing of life outside the camp, does hard manual labor all day every day, experiences torture, doesn't know money exists, sees executions, lives by the 10 Rules (such as "immediate death" for most infractions), and never experiences love or friendship. It's like doing an experiment on human beings for fun. It's sadistic.

That said, while the book has shocking stories and unbelievable moments, it really is interesting and a fascinating look inside the human spirit. Shin does escape (hence the title) and his travels through China, South Korea and to the US are equally interesting as his time in the North Korean camp. How does one respond to kindness, to help, to love? How do you make your way in the world when you don't speak the language--literally or figuratively? Shin has a true case of Post Traumatic Stress and is still working through it, learning to trust others a little at a time.