Review: Nothing to Envy (Barbara Demick) 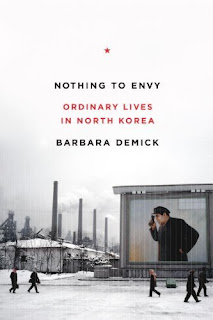 Title: Nothing to Envy: Ordinary Lives in North Korea

Author: Barbara Demick
Genre: Adult Non-fiction
Pages: 336
Rating: 4.5 out of 5
Challenges: PoC
FTC Disclosure: I bought this on my iPad
Summary (from Amazon): Award-winning journalist Barbara Demick follows the lives of six North Korean citizens over fifteen years--a chaotic period that saw the death of Kim Il-sung, the rise to power of his son Kim Jong-il, and a devastating famine that killed one-fifth of the population. Demick brings to life what it means to be living under the most repressive totalitarian regime today--an Orwellian world the tis by choice not connected to the Internet, where displays of affection are punished, informants are rewarded, and an offhand remark can send a person to the gulag for life. Demick takes us deep inside the country, beyond the reach of the government censors, and through meticulous and sensitive reporting we see her subjects fall in love, raise families, nurture ambitions, and struggle for survival. One by one, we witness their profound, life-altering disillusionment with the government and their realization that, rather than providing them with lives of abundance, their country has betrayed them.

Review: Wow. I knew things in North Korea were bad, but I had no idea just how bad they were! This book is the type of non-fiction that appeals to me, it reads like a story, but I learn along the way. I am not really sure how to review this book since what I feel I've gotten out of it is interesting tidbits about life in North Korea so I'm making a list. 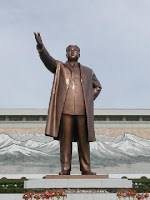 Click to see my updated Google Map. Another new country before the end of the year! I have never been to either Korea and don't really know much about the countries to tell the truth. I have read one other book set in South Korea: Far From the Bamboo Grove, a book I really enjoyed, and I've read the graphic novel Pyongyang, which was also really interesting.