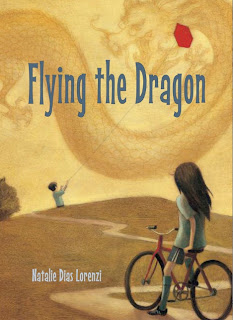 
FTC Disclosure: I received this book for free from the publisher and I am going to donate it to my daughter's school

Summary (from Amazon): Skye and Hiroshi are cousins, but they've never met. How could they, when Skye's father hasn't spoken to his Japanese family since before she was born? But now their grandfather is sick, and the family is coming to the United States for his treatment. Skye and Hiroshi are stuck with each other. Now Skye doesn't know who she is anymore: at school she is suddenly too Japanese, but at home she's not Japanese enough. And as Hiroshi struggles to improve his English, he has to contend with Skye butting in on his rokkaku kite-flying time with Grandfather--time that seems to be running out.

Review: I am a sucker for a book involving cultures outside of the United States. Add in some family drama and feel good moments and I am sold! I read this book in two sittings, partly because it is aimed at upper elementary/middle school and partly because I was enjoying it so much.

Skye is a likable main character. She plays soccer, gets along with her family, has good friends, and doesn't necessarily think of herself as Japanese. She speaks it a bit, but isn't really in touch with her dad's culture. I also like Hiroshi who is so out of his element. He really made me think about what it is like for our students who come from other countries and are so afraid to speak English in case they make a mistake. His entire life has been disrupted and he is just trying to cope.

The kite flying, building, and fighting is wonderful stuff. I didn't realize the Japanese did that much as I've only read about it in books about Afghanistan. I liked how it brought characters together, but also tore them apart as the cousins vied for the grandfather's attention; it was so realistic. Even as they knew they were begin petty and mean they couldn't stop themselves.

The grandfather's illness was also very well done. I have a number of people in my life that are very ill and this storyline really touched me (read: crying while reading). It wasn't overly dramatic, but realistic in its portrayal of illness itself, human dignity, and how others react when they are dealing with a terminal illness of a loved one.

All in all this is a lovely story that I think young people will enjoy. It's got cultural elements, a cool hobby (kite flying and fighting), nice families, and issues that everyone can relate to (jealousy, family, change, and illness).