Review and Give Away: Muslim Women Reformers (Lichter) 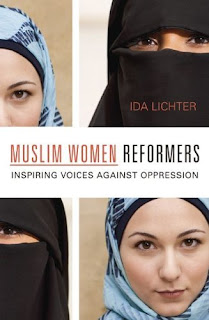 Title: Muslim Women Reformers: Inspiring Voices Against Oppression
Author: Ida Lichter (here's a link to her twitter feed)
Genre: Adult Non-Fiction
Pages: 513 (402 to 513 is notes, appendix, etc)
Rating: 4 out of 5
Challenges: PoC (3); Middle East (7); One, Two, Three Theme (Middle East);
FTC Disclosure: I got this book free from Lisa Roe of online publicist
Summary (from the back of the book): In Iran, the credibility of a woman's testimony in court is valued at only half that of a man's. IN Saudi Arabia, women are not allowed to drive cars or to leave their homes without their husbands or a male relative acting as a chaperone. In Iraq, despite the foreign coalition's pledge to liberate and democratize the people, Basra's police force has acknowledged that women are routinely killed for breaking Islamic dress codes. In Egypt, even though government officials have spoken out against the barbaric practice of female genital mutilation, the custom continues at the urging of Islamic fundamentalists who claim that to outlaw it would be "tantamount to promoting vice."

Since the attacks of 9/11, no region of the world has received more attention than the Middle East, where the actions of foreign forces and the strident demands of Islamic extremists are the media's focus. Yet half of the population of these countries remains silent, except for the courageous protests of Muslim reformers, who barely receive any notice. In Muslim Women Reformers, Ida Lichter goes behind the veil to take a powerful, critical look at the lives of Muslim women and the inspirational stories of those dedicated to promoting women's rights--women brave enough to risk arrest, torture, and even death to achieve fair, equitable, and just treatment.

Review: When I first read a review of this book I wanted to read it, but I had a difficult time finding it (perhaps it hadn't been published yet) so I wrote it down on my "be sure to buy these books" list hoping it would appear in my life. And it did! I got an email from Lisa Roe of Online Publicist asking if I wanted a copy to review; how perfect is that? So here we go...

I like the way Ida Lichter set up this book: each chapter covers a different country in either northern Africa or the Middle East. Within each chapter there are a few pages of introduction and background, covering a brief history of Islam in the country, politics in regards to women, and some of the bigger challenges that women in that country face, whether political or personal. Following the background there are stories of individual women who have spoken out against the injustices faced by women and girls and the consequences or successes that they have experienced.

This book is so full of facts and information that it got to be a bit overwhelming at times, but the research is impressive with detailed stories, quotes from letters, laws, and books in addition to awards won, legal cases fought, and personal stories that will break your heart. There is a real variety of how women are treated throughout these countries, but the common thread it that men and shari'ah law rule.

The women in this book have gone up against their families, their governments, their societies, and interpretations of their religion, facing death threats, expulsion, and ridicule in order to accomplish their goal of bettering lives for women living in Islamic countries. I found the stories inspiring and depressing at the same time because while these women are doing amazing things, life for many women isn't changing.

One of the aspects that I found most interesting is that the younger reformers are using blogs and the internet to get their messages out to the people. That is a much more difficult medium for governments and religious leaders to combat. In addition, it means the women can reach a much wider and international audience.

I do worry that after reading this book people will come away with the idea that women in these countries have no hope, that Islam is bad, and that life is all horrible for women in the Middle East. Unfortunately, that is often all we hear about the region. I am not denying the difficulties faced by women under political (read: male) interpretation of Islam by any means. But we can find similarly horrible stories (rape, denial of freedoms, injustice in the legal system) from women and minorities in the US and other western countries. I realize the difference is that in the west it isn't systemic and our society as a whole isn't supportive of the inequalities. 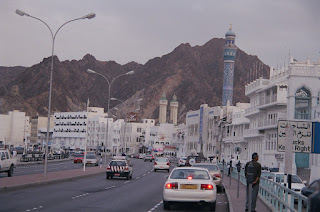 I think it's funny how there are certain parts of the world that interest us more than others. For me, the Middle East is one of those "areas of interest". My ex-husband's family lives in Oman (not included in Ira Lichter's book...I wonder why that is) so I've been there four times. The photo on the left is of the street along the ocean in Muscat, Oman. Oman is a very easy country to travel in; it has good relations with the west and a lot of ex-pats live there because of the oil industry. If you are interested in reading other books about this region, check out the Middle East Challenge review page or the Challenge's introduction page that lists many books on the Middle East. Click to see my updated Google Map.

I just got this one for review too. I do hope people don't get the idea that all of the MIddle East is bad or anti-women... :/

Thanks for sharing this book and your thoughts on it. I am very interested in learning more about Islam and women of the Middle East. I've read lots of books about these topics over the years, but more and more voices have arisen out of this area lately and I wanted to listen to what these women have to say.

Thanks--I'm off to put this title on my wishlist.

As a Muslim myself, I don't know why there's such a bad hype over Muslim women in Middle East. Yes, I do agree political interpretations in Middle East has something to do with it but women of all other places/continent faces sexism. It's not because of religion itself but it's the fact women always be discriminated. oh, Thanks for lighting the book. I'm adding it to my TBR pile too.

This book sounds fascinating and frightening and a book most of us should read if only to make ourselves more aware of things happening to other women in the world. I know a little bit about Islam and the lives of Islamic women but not nearly enough which is one of the reasons I want to read this book.

These women sound amazingly courageous and inspiring. I'm not sure I could do what they do. It's amazing that these terrible things happing in the 2011 in the 20th Century.

Thank you for reviewing this book and for your wonderful review.
~ Amy

I do want to read this one. I've always been fascinated by how women fought against a regime that was usually so women-unfriendly. I like that the author sets up each chapter in a different country.

Amanda--I think it's too late, a lot of people (Americans) already think Islam is all about controlling and oppressing women

Mrs. DeRaps--I liked that this book was inspiring and gave hope that things can change (and that women can play a role in that)

Darlyn--I agree and thought of you as I read this book (don't you live in Malaysia?). She has a chapter on Malaysia saying how it is one of the better countries, giving women more rights than many of the others. Anyway, I agree that women have it tough all over, but with covering, I think westerners see muslim women as oppressed.

Amy--The women are definitely courageous! Many of them have received death threats, been beaten, killed, etc

Aths--It was good to read about each country individually. The organization also made it so that I could take a break if I needed to and not feel like I lost my place or the flow since each story seems self-contained.

This sounds so interesting! I would love to read this.

Sheila--it really is an interesting book; I hope you entered the give away

I’ve also been very curious about the Middle East, but from a more historical and artistic perspective.

I’m always afraid that books like this one will get me too worked up and angry.

When you say you worry about people’s idea after reading the book, do you mean that the book doesn’t give much hope or that that’s the way people generally think?

Alexandra--I worry that people already have preconceived ideas about the middle east (veils, oppression, etc) so that any information they read that supports that (like this book) means they think there isn't anything else going on there