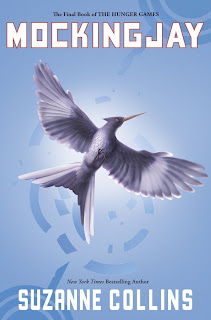 Title: Mockingjay
Author: Suzanne Collins
Genre: YA dystopian fiction
Pages: 390
Rating: 4.5 out of 5
Challenges: YA
FTC Disclosure: I borrowed this from my school's library (yes, I read it before I actually put it into our collection)
Summary (from the inside flap): Katniss Everdeen, girl on fire, has survived, even though her home has been destroyed. Gale has escaped. Katniss' family is safe. Peeta has been captured by the Capitol. District 13 really does exist. There are rebels. There are new leaders. A revolution is unfolding.

It is by design that Katniss was rescued from the arena in the cruel and haunting Quarter Quell, and it is by design that she has long been part of the revolution without knowing it. District 13 has come out of the shadows and is plotting to overthrow the Capitol. Everyone, it seems, has had a hand in the carefully laid plans--except Katniss. The success of the rebellion hinges  on Katniss' willingness to be a pawn, to accept responsibility for countless lives, and to change the course of the future of Panem. To do this, she must put aside her feelings of anger and distrust. She must become the rebels' Mockingjay--no matter what the personal cost.

Review: I really liked Hunger Games and I loved Catching Fire even more. Could Mockingjay possibly live up to the hype? Mostly. Catching Fire is still my favorite book in this trilogy. I am not going to spoil any of the plot for you in this review since I hate it when that happens to me. So here's what I thought about various aspects of Mockingjay:


I felt satisfied when I finished this book, like everything was taken care of. That isn't too say they ended up the way I wanted. People I like died (no surprise there). Lots of them. But Collins has done a great job commenting on our society's proclivity for war, need for power, and our uncanny ability to screw things up. However, she also shows the resiliency of the human race and how, in the face of extreme adversity, we still hold it together and start again, hoping to make it better the next time around.

I actually liked the first half better, but then again Catching Fire was the only book in the trilogy that I *didn't* like, so I can see why we'd feel opposite on this.

I really loved this book, but like you, I found the first half slow. I appreciated the background information though. I also liked the way she put across the message on war. That was really well-done.

Amanda and Aths--There have been SO many reviews of this on the blogosphere! Honestly, I have skimmed most to see if people liked it or not and there is a real spectrum out there.

There really is a lot of opinion on the book Helen and I am enjoying all of it. Its fun to see what some liked and some did not...

All opinions are fantastic and I would think author Suzanne Collins should be thrilled with the conversations! :D

Sheila--I do hope Suzanne Collins is happy right now; her books are creating so much buzz and PR! I am having fun at school as the first students dive into Mockingjay!

I love the fact that you read it first. I wouldn't have been able to resist that either!

Heather--that's one of the HUGE advantages of being a high school teacher librarian! I always steal the "good" books first, read them really quickly, then put them out on display. My rationale is that I then have something to say to the students about the books