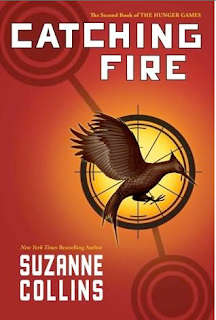 Title: Catching Fire
Author: Suzanne Collins
Genre: YA dystopian fiction
Rating: 5 out of 5
FTC Disclaimer: I borrowed this audio book from my school's library
Challenges: YA (10); TBR (4)
Summary (from the inside flap): Against all odds, Katniss has won teh Hunger Games. She and fellow District 12 tribute Peeta Mallark are miraculousely still alive. Katniss should be relieved, happy even. After all, she has returned to her family and her longtime friend, Gale. Yet nothing is the way Katniss wishes it to be. Gale holds her at an icy distance. Peeta has turned his back on her completely. And there are whispers of a rebellion against the Capitol--a rebellion that Katniss and Peeta may have helped create.

Much to her shock, Katniss has feuled an unrest she's afraid she cannot stop. And what scares her even more is that she's not entirely convinced she should try. As time draws near for Katniss and Peeta to visit the districts on the Capitol's cruel Victory Tour, the stakes are higher than ever. If they can't prove, without a shadow of a doubt, that they are lost in their love for each other, the consequences will be horrifying.
Review: What can I say? I loved this second book of hte Hunger Games series and can't wait for the third istallmanet, Mockingjay, which comes out August 24, 2010. I got right into they rhythm of the characters and the setting and was swept up in the excitement and tension that existed in the first book. The description on the inside flap of the book is so good at not giving away any of the plot and I want to make sure I do the same.

The Capitol is just so cruel in its devious plans and its controlling ways; I can see why the Districts want to rebel. But at what danger to everybody involved and even those who weren't invovled. It made me think about what risks I would be willing to take. If you have family, do you still risk everything?

And the cliff hanger at the end! So well done, yet so cruel of Collins to leave us hanging!


Would you (or do you) rise up against injustice when you see it? What are you willing to do or say when you see wrong doings?

Email ThisBlogThis!Share to TwitterShare to FacebookShare to Pinterest
Labels: 5 Stars, Dystopian Fiction, YA

Nice review! I still need to get around to reading Catching Fire. :)

Visted from The Saturday Network.

Great review! I have both books on my shelf right now and will probably start reading them in coming weeks. Guess that you'll have to be very patient until the next installment hit the market this August/Sept eh?? Thank you so much for visiting my blog :)

Great review! I loved Catching Fire! So good! And I was so mad at that cliff hanger ending! LOL

Glad you liked this book! It is one of my favorites too! Am waiting eagerly for Mockingjay!

Orchid, I was going to wait a while and worried that I would be sick of the characters if I read Catching Fire too close to Hunger Games. Not to worry!

Shy and Aths, I am definitely going to practice patience while I wait for the third installment!

Brianne, I had been warned about the cliff hanger so knew it was coming. So smart of her to do it though as we're all salivating for number 3

Hmm, you're a bit skimpy on actual details about what you liked about the book. Although I agree that the cliffhanger was rather cruel. However, I felt like the entire book was just a place-holder for the third one.

Liana, I like the characters and their passion for what they are doing, I like the tension between the Capitol and the districts, I love the idea that District 13 is still lurking out there ready to strike, and I like the commitment that Katniss has to her family. Though Collins was certainly building up to number 3, Catching Fire has important development of relationships, history, and information that we need in order to understand number 3.