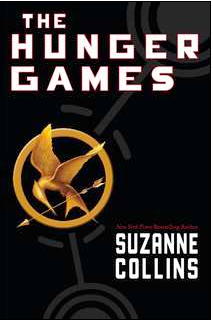 Title: Hunger Games
Author: Suzanne Collins
Genre: YA, dystopian fiction
Pages: 374
Rating: 5 out of 5
FTC Disclosure: I borrowed this book from my school's library
Challenges: YA Reading Challenge (#4) and TBR Challenge (#2)
Summary: (from the inside flap): In the ruins of a place once known as North America lies the nation of Panem, a shining Capitol surrounded by twelve outlying districts. The Capitol is harsh and cruel and keeps the districts in line by forcing them all to send one boy and one girl between the ages of twelve and eighteen to participate in the annual Hunger Games, a fight to the death on live TV.
Sixteen year old Katniss Everdeen, who lives alone with her mother and younger sister, regards it as a death sentence when she steps forward to take her sister's place in the Games. But Katniss has been close to death before--and survival, for her, is second nature. Without really meaning to, she becomes a contender. But if she is to win, she will have to start making choices that weigh survival against humanity and life against love.
Review: I am probably the last person in the book blogging world to read this book, but I am so glad that I finally did! While the premise sounds so violent and horrible, Hunger Games is so much more than just fighting to the death. The characters are well-developed, the plot is tight and interesting, and, I think, the book is commenting on our society as a whole.
The setting is an interesting one: references to the current US and our regions are reflected in the twelve districts of Panem. I like that Katniss, the main character, is strong, independent, and thinks for herself. Though there is violence, it certainly does not dominate with gruesome descriptions (thank goodness). There is tension, both physical and emotional, which propels the story along. I fond myself angry at the District (government) and pulling for the little people whose lives are torn apart each year with the Hunger Games.
I stayed up 2 hours past my usual bedtime last night to finish this book. I highly recommend it even if you aren't a science fiction fan!
Should I read the sequel? Is it as good as Hunger Games? Are you eagerly awaiting the release of the third book in August?
Posted by Helen's Book Blog

Hi Helen,
You're not the last person not to have read it... I am! However, my 14 year old read it, and the sequely, and is very eagerly awaiting the third installment. So, I say, read the sequel!

I LOVE your blog!

Helen, I stayed up past my bedtime as well when i read this one. And the second book was almost as good, and you should definitely read it. And I am SO looking forward to the third book coming out.

PS. Love the look of your blog.

Sandie--great to hear from you! Hope you're enjoying the snow up your way.

You've all convinced me to read the sequel. I'll give myself a little time though so that I don't get sick of the characters.

You have to read the sequel. It's almost as good as the first one. But...after you read book 2 you will immediately want to read book 3....so much so that I would almost recommend waiting until book 3 came out. Just so you wouldn't have wait.

Does that make sense?