Review: Hotel on the Corner of Bitter and Sweet (Ford) 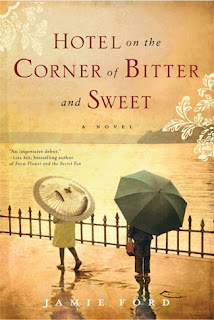 Title: Hotel on the Corner of Bitter and Sweet
Author: Jamie Ford
Genre: Historical Fiction, Adult Lit
Pages: 285
Rating: 4.5 out of 5
FTC Disclosure: I bought this book with my own money
Summary (from the back of the book): In 1986, Henry Lee joins a crowd outside the Panama Hotel, once the gateway to Seattle's Japantown. It has been boarded up for decades, but now the new owner has discovered the belongings of Japanese families who were sent to internment camps during World War II. As the owner displays and unfurls a Japanese parasol, Henry, a Chinese American, remembers a young Japanese American girl from his childhood in the 1940s--Keiko Okabe, with whom he forged a bond of friendship and innocent love that transcended the prejudices fo their Old World ancestors. After Keiko and her family were evacuated to the internment camps, she and Henry could only hope that their promise to each other would be kept. Now, forty years later, Henry explores the hotel's basement for the Okabe family's belongings and for a long-lost object whose value he cannot even begin to measure. His search will take him on a journey to revisit the sacrfices he has made for family, for love, for country.

Review: I remember a couple months back when it seemed that everyone in the book blogging world (or at least my little portion of it) was reading this book. I thought it sounded interesting, but I was trying not to buy new books. I promptly forgot about this book until I was in the Los Angeles airport on my way to London and I saw this book in a shop. Hmmm...it's paperback and would mean I'd have another book to read on my vacation. I am so glad that I bought it!

I liked the character development of Henry and how we saw him as a child in the 1940s (one of my favorite eras) and as an adult in the 1980s. He was really working through a lot of thoughts and memories as an adult and through racism as a child. The fear and panic that spread throughout white America after the bombing of Pearl Harbor was scary! As a person of Chinese ancestry at an all-white elementary school Henry was caught in an odd predicament: not white, yet trying to make sure people knew he wasn't Japanese (his dad even made him wear a "I am Chinese" button). It must have been so awful and so difficult for both adults and children on all sides. It was also interesting to read about Chinatown in this time period since I enjoyed that part of Lisa See's Shanghai Girls.

I also liked the changing relationship between Henry and his grown son. Through descriptions of his relationship with his father we find out why Henry is the way he is and we see him work his way through fighting his past to fix things with his son. I liked that Henry was allowed to grow and change through revisiting his past.

And the friendship with Keiko was so sweet! At first I was thinking that it was far-fetched at 12 and 13 to care so much, but then I remembered my first heavy crush the summer I turned 13. We met at sleep-away camp and I liked a boy who lived far away from me. I remember the intimate letters we shared for a year after camp and that helped me appreciate Henry and Keiko's friendship/romance more.

This one is in my TBR pile, and I can't wait. Great review!! Thanks!

I have this book borrowed from the library. I'm not sure when I will get to it, but I hope maybe next month. Glad you liked it!

I really enjoyed this book. It's tender and well-written. I was also fortunate to interview the very gracious Jamie Ford on my blog.
I'll be taking a short break from blogging, but ill return to it soon. :)

Rachel--I think you will like this book; it's what I call a "gentle read" in that the writing feels gentle, but not boring

Aths--Enjoy the book when you get around to it

Suko--Tender is a really good word for this book, both in the relationships and the writing style. How great to have been able to interview the author

I got this for my birthday in December and I still haven't read it. We plan on reading it for our November book group -- if I don't get to it sooner.

I have this book on my TBR list. Your review made me want to read it just now! I'll have to check if I could get it from the library for my summer holidays.

Gerera--Read this with your book group; it will be a good one for discussion!

Helen I find that a lot in books I have read where the young characters seem to be too mature - and this book was that way too. It was hard for me to keep reminding myself that they were so young when I kept picturing them as 14 15... just a wee bit older. :)

I did love this book!

Sheila--So glad someone else out there pictures characters (especially early teen ones) as a bit older. I wonder how current teens would see it.