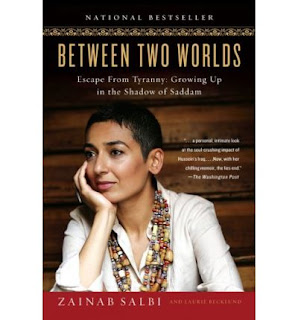 Title: Between Two Worlds: Escape from Tyranny: Growing up in the Shadow of Saddam
Author: Zainab Salbi
Genre: Non-Fiction, Women, Middle East
Rating: 5 out of 5
Pages: 287
Challenges: Women Unbound
FTC Disclosure: I received this book as a gift
Summary (from the back of the book): Zainab Salbi was eleven years old when her father was chosen to be Saddam Hussein's personal pilot and her family's life was grafted onto his. Her mother, the beautiful Alia, taught her daughter the skills she needed to survive. A plastic smile. Saying yes. Burying in boxes in her mind the horrors she glimpsed around her. "Learn to erase your memories." she instructed. "He can read eyes." In this richly visual memoir, Salbi describes tyranny as she saw it--through the eyes of a privileged child, a rebellious teenager, a violated wife, and ultimately a public figure fighting to overcome the skill that once keep her alive: silence.

Review: I had never heard of the non-profit group Women for Women International until last week when my brother and sister-in-law (whom I am visiting in London) told me they were going to a luncheon sponsored by the group. My sister-in-law had read this book and brought me home a copy when I didn't find it at the local chain bookstore here. I had no idea what I was in for.

This book is fascinating, scary, overwhelming, interesting, and eye-opening. Zainab's family was one of "Saddam's friends", not by choice, but because he wanted it to be so. As with most of us I know that Hussein was an awful man and a dictator, but Zainab's experiences vacationing in his palaces, living in fear that he would hurt her family, seeing how he manipulated people and situations is so revealing! I don't want to give away details in case you read this book, but he was scary and odd.

The author also weaves history, politics and religion into her memoir, but she does it in such a way that I learned as I read. It is not a dry telling of events and facts, but rather the history, etc enhances her experiences.

We also read a lot of her family, how they were affected by Hussein, how they worked (and didn't work) because of their personalities, the times (1970s and '80s), and the pressures put on them as part of the dreaded inner circle. Towards the end of the book Salbi moves to America and is stranded there as the first Gulf War begins. In my naivete, I assumed life would be better there, but it definitely was not (at least not in the beginning).

When the Bosnian war began in the 1990s Salbi became interested in the stories of the women who suffered rape and torture under Milosevic's regime (do you remember those horror stories?). She went to Bosnia to meet women survivors and from them was inspired to create the non-profit Women for Women International, which works with women rape survivors in many areas around the world (Iraq, Rwanda, Kosovo, Congo, and more). Her work is so important as is this book!

When I read a non-fiction book that moves me as this one did (like Greg Mortenson's Three Cups of Tea and Kris Holloway's Monique and the Mango Rains) I feel like I should go out there and make a difference, donate, help others, and do what I can, at whatever level I can, to help women.

Great review Helen!
This book sounds so interesting! And what an interesting perspective- from a Middle Eastern woman. Not only was it probably difficult growing up as a woman, but to have to be guarded with yourself for the safety of your family must have been very taxing. Thanks for sharing this book here!

Have a great week!

I love reading inspirational books like Three Cups of Tea/Stones into School - yes I definitely felt like doing something after I got done reading the book!

So I think I'll really like this book, and the Monique book you mentioned - will be adding them to TBR!

Thanks for introducing those books to me :)

Have you read A Long Way Gone: Memoirs of a Boy Soldier by Ishmael Beah? A heartbreaking one... Other similar ones I'd read are Infidel by Ayaan Hirsi Ali and Left to Tell: Discovering God Amidst the Rwandan Holocaust by Immaculee Ilibagiza. All worthwhile read.

this one sounds fascinating!

Books like these inspire me a lot too! I have this sudden urge to go out there and do something to contribute. I haven't heard of this book, but for sure it is a must-read. It will be fascinating to read from the perspective of someone who "knew" Saddam.

Christa--I have read A Long Way Gone and really liked it though it was intense. I'll add the other 2 to my TBR list, thank you!

Diane--It was a fast read as well, not dry at all

Aths--This book gives an amazing insight into who Saddam Hussein, the man, was. Not just the dictator. And, boy was he nasty...and odd.