We've been to Paris, France since I last posted!
The weather was perfect, the French were friendly (especially good since my French is next to nil), the baguettes were delicious, and the sites were wonderful. We walked everywhere so I now have blisters on the balls of both my feet, but it's a small price to pay. Here's some highlights of what we saw (my own photos will get posted when we get home): 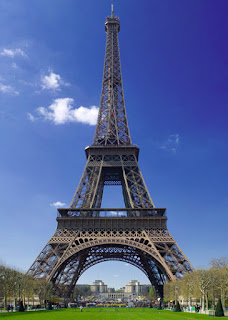 We wen to the Eiffel Tower, but did not go up. The highest level was closed and the lines for the first and second floors were WAY long. So we just gazed and enjoyed 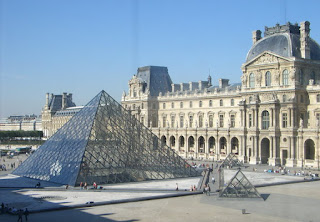 We actually went to 2 museums: the Louvre (see above) and the Musee D'Orsay. The big draw at the Louvre was the Mona Lisa, which my daughter really wanted to see. The crowd was actually only 4-deep, which isn't too bad for tourist season! Honestly, I don't really like a lot of the other art at the Louvre, except for some Jacques Louis David, Winged Nike (statue) and the Venus de Milo. I much preferred the Orsay which had tons of Monet, Renoir, Van Gogh, Gaugin, Manet, Cezanne, and Degas. Ah, all my favorite artists! 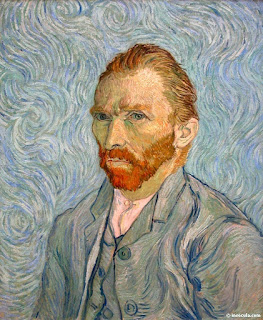 We also spent time seeing the various palaces, government buildings, opera house, national library (of course), and relaxing parks. We even stumbled across the memorial for Lady Diana!
And, we took the Chunnel (train under the English Channel), which was a great way to travel. Cheaper and faster than flying. And, much less of a hassle!

Your pictures are gorgeous! Sounds like you had a great time :)

I always wanted to go to Paris!

Reederreads--I wish I could take credit for this photos, but I cannot. They are off the Internet since I have no way of downloading my photos while I am here. I'll post my photos upon my return

Marie--Paris is pretty fun, though I do like London better! But that's probably because I speak English! :-)

Sounds like a great trip. I live just outside Paris and it is a wonderful city.

You know I'm jealous, don't you? LOL! I've always wanted to visit Paris! I'm even learning French just for that. :)

Hannah--how fun to live just outside Paris! Are you French or a transplant? I would love to live abroad again (I've lived in Britain, Germany and Austria in the past)

Aths--That's great that you are learning French! I took French in high school (so long ago) and so I feel like a real idiot when I try to talk to people in France and can't.

We were in Paris last summer, and our sightseeing was remarkably like yours (didn't go up in the Eiffel tower but walked around the base, loved the Musee D'Orsay). And didn't you love how efficient the French waiters are? Some people say they're not "friendly" but we found them very professional and good at what they do.

Jeanne--sorry it took so long for me to respond! Yes, we had very friendly waiters in Paris. And, I must say, that in general the Parisians were very polite, patient with my pathetic attempts at French, and helpful.