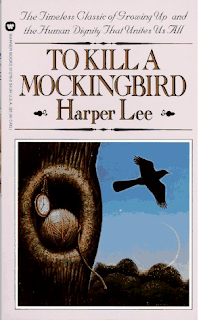 Title: To Kill A Mockingbird
Author: Harper Lee
Genre: YA
Rating: 5 out of 5 stars
Challenges: YA (#12); Flashback (high school); Take a Chance (#3: Best 100: Mystery List)
FTC Disclosure: I borrowed this audio book from my local library (local libraries rock!)
Summary (from the back of the audio case): Scout Finch, daughter of the town lawyer Atticus, has just started school. She's known how to read and write, though, ever since she and her older brother Jem can remember. Bored with school, Scout and Jem decide on a project: to make Boo Radley, the town's notorious recluse, come out. But Scout's carefree days come to an end when a black man in town is accused of raping a white woman--and Atticus is the only man willing to defend him.
Review: What can I possibly say that hasn't already been said about this amazing book?! I read it WAY back in high school and remember it was one of the ones I actually liked that I was forced to read in an English class. And, now, as a high school Teacher Librarian, it is one of the required books that our students really enjoy. My daughter's 4th grade teacher re-reads this book every year (I can't quite imagine doing that). In other words, what's not to like.

The audio on my version was done by Sissy Spacek, which was a wonderful choice! Her southern accent, her cadence, the tone all combine for listening pleasure. She also does a great job at allowing the listener to know exactly who is speaking without doing fake voices; she just changes her voice slightly.

The characters are so real. I can picture them and their interactions as I listen to the story. I love the relationship between Scout and Jem. They are brother and sister so have their moments, but in the end they support one another, love each other, and I adore that they spend so much time together. My brother and I were like that when we were young (oh, that sounded like we aren't good anymore. We are, we just live so very far apart. I miss seeing him often).

My memory of this book was that it was all about Boo Radley, but really he is a thread that appears throughout. He pops up and plays an important role (the tree gifts, the blanket during the house fire, etc). It's about life, racism, family, hard times, the south, and so much more. How could I have forgotten about Tom being accused of rape? I listened to that part as I drove in the driving rain; somehow that seemed to appropriate.

Harper Lee captured the town, its citizens, the times, and the feeling of the south. What a wonderful novel! Now I just need to watch the movie since this is the book I plan on doing for the movie/book challenge.