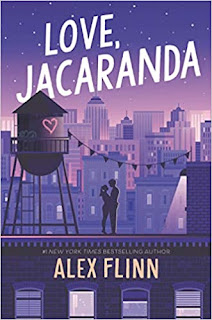 Location (my 2021 Google Reading map):  USA (FL, MI, NY)
Summary (from Amazon): Jacaranda Abbott has always tried to keep her mouth shut. As a foster kid, she's learned the hard way that the less she talks about her mother and why she's in jail, the better. But when a video of Jacaranda singing goes viral, a mysterious benefactor offers her a life-changing opportunity--a scholarship to a prestigious boarding school to study musical theater. Eager to start over somewhere new, Jacaranda leaps at the chance. She pours her heart out in emails to the benefactor she's never met.
Suddenly she's swept up in a world of privilege where the competition is fierce and the talent is next level. As Jacaranda--Jackie to her new friends--tries to find her place, a charming boy from this world of wealth catches her eye. She begins to fall for him, but can he accept her for who she really is? 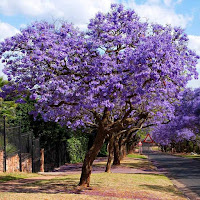 Review:  Ok. Funny and tangentially related story. I love Jacaranda trees and our town is full of them so the spring is beautiful around here with all the purple flowers. My daughter told me the other day that I've been pronouncing Jacaranda wrong all these years (I say "jacarandar"). I'd never seen it written down and my mother, with her British accent, adds an "r" on the end of many words that end with an "a." So there you go, I always thought they were Jacarandar trees, but they are not.
Back to the novel.... this novel is written in epistolary form, which I think worked really well. Jacaranda sends emails to her benefactor letting him know about her experiences at the boarding school. At times I did think she was telling much more than a teenager would, but she also thinks he isn't reading the emails so she begins to treat them like a journal. I did figure out who her benefactor is before it was revealed and it was a bit strange, but worked with the story line.
While this story could be seen as just a romance and teen drama novel, it also deals with more important issues (of course it does, YA literature does this very well). There aren't many novels about foster youth so I liked that aspect and how Jacaranda's emails reveal how she feels about her former foster homes, how it feels to be "sponsored" by someone with unlimited wealth, and how to deal with what one reveals about one's private life to others. Will she be treated differently? Can she  just be appreciated for her talent and not as someone who has "overcome so much?"
Finn also showed the wonder and excitement with which Jacaranda sees her new world and I liked that. New cities, new experiences, clothes, food, etc. She really captured well how it feels to leave home for the first time and see places and things that are new. The story also realistically shows how teenagers make stupid mistakes in amongst good decisions, something that I think adults often forget.
Challenges for which this counts: none

Email ThisBlogThis!Share to TwitterShare to FacebookShare to Pinterest
Labels: 4 Stars, Romance, YA