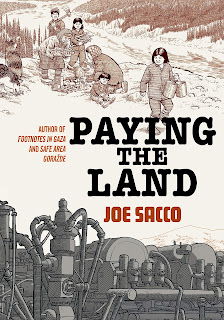 Summary (from Amazon): The Dene have lived in the vast Mackenzie River Valley since time immemorial, by their account. To the Dene, the land owns them, not the other way around, and it is central to their livelihood and very way of being. But the subarctic Canadian Northwest Territories are home to valuable resources, including oil, gas, and diamonds. With mining came jobs and investment, but also road-building, pipelines, and toxic waste, which scarred the landscape, and alcohol, drugs, and debt, which deformed a way of life.
In Paying the Land, Joe Sacco travels the frozen North to reveal a people in conflict over the costs and benefits of development. The mining boom is only the latest assault on indigenous culture: Sacco recounts the shattering impact of a residential school system that aimed to “remove the Indian from the child”; the destructive process that drove the Dene from the bush into settlements and turned them into wage laborers; the government land claims stacked against the Dene Nation; and their uphill efforts to revive a wounded culture.Against a vast and gorgeous landscape that dwarfs all human scale, Paying the Land lends an ear to trappers and chiefs, activists and priests, to tell a sweeping story about money, dependency, loss, and culture―recounted in stunning visual detail by one of the greatest cartoonists alive.
Review:  I have enjoyed the previous two Joe Sacco graphic novels that I have read: Palestine, and Safe Area Gorazde so was looking forward to this one, especially since my niece recommended it. 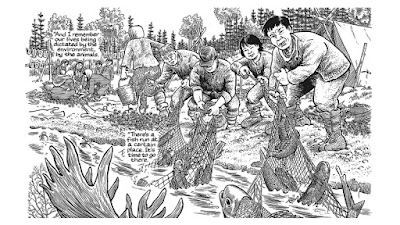 Joe Sacco's books have illustrations that are so evocative and fill the page, they truly are a story unto themselves. He also has a way of getting to the heart of the issue right from the start. In this book it's an interview with Paul Andrew, a member of the Dene in Northwest Canada, who grew up with a strong connection to the land. It's a wonderful entry for the reader to begin to understand how important the environment (and all it encompasses) is to the people.
Sacco shows how the Dene struggle with identity, who owns the land based on treaties signed long ago, development (think: jobs) versus working with the land/environment, and differing opinions within the Dene. I also found the sections on the Dene culture and how many feel it is disappearing an interesting social commentary. Some of it is generational and some is development.
There is a large sections on alcoholism and its affects on the community, but the most impactful, to me, is the section on the schools. The children were forced to fly away and attend residential schools, which were Catholic. The experience was traumatizing and long lasting, eventually resulting in reparations for those who attended.
The book is a telling of contradictions and conflict. The environment vs development, traditional life vs development, a life of learning from elders vs the residential schools, and more. There are a lot of details in the book and a ton of people to keep track of, but it is all super interesting.
Challenges for which this counts: