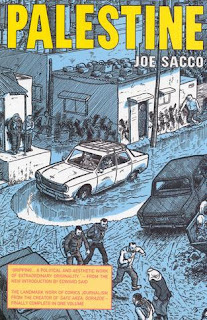 Title: Palestine
Author: Joe Sacco
Genre: Non-fiction, graphic novel
Pages: 286
Rating: 4 out of 5
Challenges: Reading from my Shelves, PoC, Middle East
FTC Disclosure: I received this book as a Christmas present and I am going to donate it to my school library
Summary (from the author's website): In late 1991 and early 1992, Joe Sacco spent two months with Palestinians in the Occupied Territories, traveling and taking notes. Upon returning to the United States in mid-1992, he started writing and drawing Palestine, which combined the techniques of eyewitness reportage with the medium of comic-book storytelling to explore this complex, emotionally weighty situation. The nine-issue comics series won a 1996 American Book Award and was a major success in its original two-volume collection. Palestine has now finally been released in a new one-volume format, with a new forward by Edward W. Said.

Review: I read so many graphic novels at the beginning of 2010 and loved it so much, but then I stopped and I'm not sure why. So, I was really pleased when I got Joe Sacco's Palestine for Christmas. His art work is just amazing! Each page is packed with images that hit the reader with force, emotion, and a feeling that you are really there. I wonder if he took lots of photographs; the people's faces are so real and different from one another. 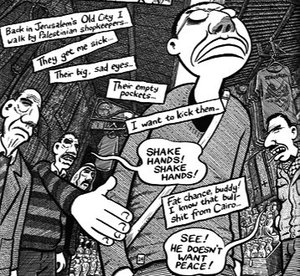 The "storyline" of this graphic novel is Sacco's own two months in Israel/Palestine. He set out to meet Palestinians, to talk to them, to hear their side of the story, both historically and in the here-and-now. I thought it was so poignant that at one point he says that he grew up in suburban America where horror was on the screen and that in Palestine he met people, old and young, who were living the horror. He couldn't get enough of it and felt like he just kept asking them for details: how long did they beat you? How did they beat you? What did the guards say? What did they feed you? He kept lists of the people he wanted to meet: someone jailed by the Israelis; someone beat up by the Israelis; someone who was injured in the intifada; etc.

I thought Sacco more than made his point that we in the west tend to hear only one side of the story: the Israeli side. He wants us to also hear the Palestinian side of it. But some of the story seemed to repeat the same issues. Perhaps we need to hear that lest we think only a few people have had these horrible experiences of detainment, jail time, beatings, shooting, and more. For me the saddest part was the young teenagers who have been shot, have fought against the Israeli forces, and whose childhood has disappeared. There just seems to be no solution. 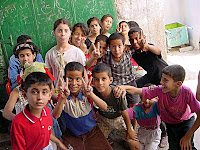 I am really enjoying all the books that I am reading for my Middle East Reading Challenge! I feel like I know quite a bit about the issues behind the Israel/Palestine history, but this book gave me a whole knew side of things in an easy to digest way. I think I've mentioned it before, but a great documentary on this issue is Promises. Click to see my updated Google Map.

I've wanted to read Sacco's books for some time now. It sounds great, and an interesting way to provide contemporary news on international issues. I think I'd enjoy his work.

You're my first source for graphic novels, so I'm glad to get one more book that I can add to the list! This one sounds good, and I really like graphic novels that are memorish or at least nonfiction.

I've been considering reading this one for two years now, but one thing has stopped me - I'm worried that it will be too graphically violent for me. I'm squeamish. I know about the torture and stuff that goes on in Palestine, well do I know it, considering it's happened to family members of mine! But the question is, does the GN depict it in picture? If so, I don't know that i can read it...

Aarti--It definitely gave me huge insight into what life is like for the Palestinians, the men especially

Aths--This was very well done though a bit long.

Amanda--Yes, there are some graphic pictures, but it's all black and white so that somehow makes it easier.

I really loved this graphic novel - it was the first non-fiction graphic text that I really read and enjoyed. I've got Footnotes in Gaza sitting here waiting for me to read and review it. Hopefully soon, you reminded me how much I love his work!