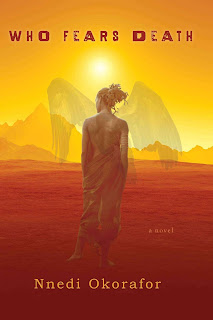 Location (my 2021 Google Reading map):  Africa (the book is not specific about the country, but the author is Nigerian so I am going with Nigeria)

Summary (from the inside flap of the book): In a post-apocalyptic Africa, the world has changed in many ways; yet in one region genocide between tribes still bloodies the land. A woman who has survived the annihilation of her village and a terrible rape by an enemy general wanders into the desert, hoping to die. Instead, she gives birth to an angry baby girl with hair and skin the color of sand. Gripped by the certainty that her daughter is different—special—she names her Onyesonwu, which means "Who fears death?" in an ancient language.
It doesn't take long for Onye to understand that she is physically and socially marked by the circumstances of her conception. She is Ewu—a child of rape who is expected to live a life of violence, a half-breed rejected by her community. But Onye is not the average Ewu. Even as a child, she manifests the beginnings of a remarkable and unique magic. As she grows, so do her abilities, and during an inadvertent visit to the spirit realm, she learns something terrifying: someone powerful is trying to kill her.
Desperate to elude her would-be murderer and to understand her own nature, she embarks on a journey in which she grapples with nature, tradition, history, true love, and the spiritual mysteries of her culture, and ultimately learns why she was given the name she bears: Who Fears Death.
Review: I read this book because my daughter read it for her post-colonial Africa course in college this semester and said it was one of the best books she's ever read. She asked me to read it and I have a difficult time saying no to her, especially when it comes to reading. The description is not one that would make me read this book. Magical realism and fantasy? The things we do for our children. Oh, it's going to be (is?) a show on HBO. And it has won numerous awards.
So... I really enjoyed this book! I wouldn't classify it as magical realism. It felt more fantasy where the magic is just part of the community, everyone accepts it, and it's not unusual. While this book is nothing like Harry Potter, I feel like magic played the same role and that I do well with.
Onyesonwu, the main character, has so much going on and we really get to know her, her life partner, Mitwa, and her friends Luyu, Diti, and Binta well. They are complex characters that propel the plot and each one plays a significant part in Onye's development. I thought the secondary characters were also interesting, even when they were evil.
And there are plenty of instances of characters you won't like and events you won't like (descriptions of rape and female genital circumcision take place in the beginning of the book). But, the book is actually feminist, with women having power, seeking power, fending for themselves, and more. It also takes a look at good and evil, ethnic rivalries, and human nature. Geography and weather are almost characters in this book, determining the course of the main characters on their journey.
I'll admit that I didn't start this book thinking I'd like it, but my mind was changed quickly.
Challenges for which this counts: