Nonfiction Review: The Eagles of Heart Mountain by Bradford Pearson 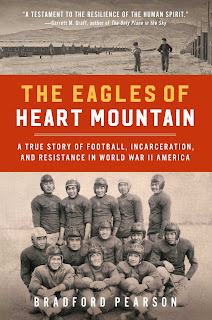 Summary (from the inside flap of the book): In the spring of 1942, the United States government forced 120,000 Japanese Americans from their homes in California, Oregon, Washington, and Arizona and sent them to incarceration camps across the West. Nearly 14,000 of them landed on the outskirts of Cody, Wyoming, at the base of Heart Mountain.
Behind barbed wire fences, they faced racism, cruelty, and frozen winters. Trying to recreate comforts from home, many established Buddhist temples and sumo wrestling pits. Kabuki performances drew hundreds of spectators—yet there was little hope.
That is, until the fall of 1943, when the camp’s high school football team, the Eagles, started its first season and finished it undefeated, crushing the competition from nearby, predominantly white high schools. Amid all this excitement, American politics continued to disrupt their lives as the federal government drafted men from the camps for the front lines—including some of the Eagles. As the team’s second season kicked off, the young men faced a choice to either join the Army or resist the draft. Teammates were divided, and some were jailed for their decisions.
The Eagles of Heart Mountain honors the resilience of extraordinary heroes and the power of sports in a sweeping and inspirational portrait of one of the darkest moments in American history.
Review: I figured this book was made for me: narrative nonfiction, sports, resilience, world war II, social justice, and more. And I was wrong. This book isn't the one for me, but I can see it's appeal for other readers so I gave it 4 out of 5.
This book is full of details. If you are someone who wants to know everything about a topic, read this book. While I was expecting something like Boys in the Boat, this is really a history of the era more than it is a study of specific people and their experiences. You do get that, you just also get a wider history of the politics, the incarceration, and the war.
While it didn't end up being what I expected, this book is well written with good personal stories tucked into the history. I am going to pass it on to a family friend whose family were all incarcerated in the camps during the war. She will really like the dense history, the stories, and the detail.
Challenges for which this counts: