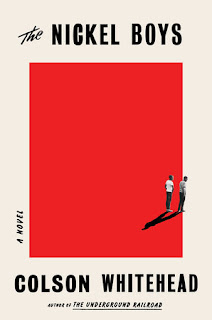 Summary (from the inside flap of the book): When Elwood Curtis, a black boy growing up in 1960s Tallahassee, is unfairly sentenced to a juvenile reformatory called the Nickel Academy, he finds himself trapped in a grotesque chamber of horrors. Elwood’s only salvation is his friendship with fellow “delinquent” Turner, which deepens despite Turner’s conviction that Elwood is hopelessly naive, that the world is crooked, and that the only way to survive is to scheme and avoid trouble. As life at the Academy becomes ever more perilous, the tension between Elwood’s ideals and Turner’s skepticism leads to a decision whose repercussions will echo down the decades.
Based on the real story of a reform school that operated for 111 years and warped the lives of thousands of children, The Nickel Boys is a devastating, driven narrative that showcases a great American novelist writing at the height of his powers.
Review: I have been meaning to read a Colson Whitehead book for a while now. I intended to read Underground Railroad, but didn't when I heard it had magical realism. Then I heard about this novel and thought it sounded intriguing. I was right.
The Nickel Boys is based on a true story during the Jim Crow and Civil Rights era. While the Nickel Academy pretends to be a reform school, in reality it is a horrifying detention center where boys are routinely tortured and, sometimes, killed. This book feels timely in many ways.
I really liked the main character, Elwood Curtis. He is such a "good kid" who is in the wrong place at the wrong time and gets swept up in a system from which he cannot escape. I like that he works within the system, doesn't give up on who he is deep down, but also tries to find ways to beat the system and the horrible men who are in charge. The secondary characters are also strong, filling the roles of mentor, bystander, and perpetrator. Oh, with a rare upstander as well.
Whiteheads' descriptions of Nickel Academy are really good, evoking emotion and a real sense of what the place looks and feels like.
Challenges for which this counts:
This book fits the Popsugar Challenge because it was published in my birth month (July)