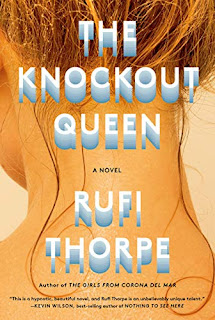 Summary (from the inside flap of the book): Bunny Lampert is the princess of North Shore⁠—beautiful, tall, blond, with a rich real-estate-developer father and a swimming pool in her backyard. Michael⁠⁠—with a ponytail down his back and a septum piercing⁠—lives with his aunt in the cramped stucco cottage next door. When Bunny catches Michael smoking in her yard, he discovers that her life is not as perfect as it seems. At six foot three, Bunny towers over their classmates. Even as she dreams of standing out and competing in the Olympics, she is desperate to fit in, to seem normal, and to get a boyfriend, all while hiding her father's escalating alcoholism. Michael has secrets of his own. At home and at school Michael pretends to be straight, but at night he tries to understand himself by meeting men online for anonymous encounters that both thrill and scare him. When Michael falls in love for the first time, a vicious strain of gossip circulates and a terrible, brutal act becomes the defining feature of both his and Bunny's futures⁠⁠—and of their friendship. With storytelling as intoxicating as it is intelligent, Rufi Thorpe has created a tragic and unflinching portrait of identity, a fascinating examination of our struggles to exist in our bodies, and an excruciatingly beautiful story of two humans aching for connection.

Review: I wasn't really sure what to expect when I started reading this book. I don't re-read the summary of a book before I start reading it because I don't want to know anything going in. I somehow got in my head that it was a romance, but I was totally wrong.
I am trying to think of words that describe this book for me and I've come up with odd, troubling, fascinating, and unsettling. Those probably sound like negative words, but I don't mean them to. This book has so much going on and it goes in a direction that I really didn't see coming that it has left me feeling a little discombobulated.
Michael seems like a lost soul until he meets Bunny. And Bunny seems unhappy and disconnected until she and Michael become friends. They are good for one another, support each other, and become stabilizing forces in each other's lives. But, somehow, things still spiral out of control, mostly because of the supporting characters (Bunny's dad, Michael's mom, aunt, and cousin). Well, and they bring stuff upon themselves as well.
I am doing a terrible job of reviewing this book, but I don't mean to. It is a book that is blunt--in its descriptions of sex, violence, and the way people treat one another--but that fits with Bunny and Michael's personalities. What you see is what you get as they are failingly honest with themselves and each other.
Challenges for which this counts: