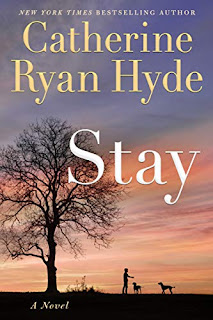 Summary (from the back of the book): In the summer of 1969, fourteen-year-old Lucas painter carries a huge weight on his shoulders. His brother is fighting in Vietnam. His embattled parents are locked in a never-ending war. And his best friend, Connor, is struggling with his own family issues. To find relief from the chaos, Lucas takes long, meandering walks, and one day he veers into the woods.

There he discovers an isolated cabin and two huge dogs. Frightened, he runs. And the dogs run with him. Lucas finds unusual peace in running with the dogs, and eventually, he meets their owner, Zoe Dinsmore. Closed off and haunted by a tragic past, Zoe has given up. She doesn't want to be saved. She wants out. But Lucas doesn't want her to go, and he sees an opportunity to bring more than one friend back into the light. It's either the best or worst idea he's ever had, but Lucas isn't giving up on Zoe or Connor.

Their unexpected connection might be the saving grace that Zoe thought she'd lost, that Connor needs, and that Lucas has been running toward.

Review: I've read two other Ryan Hyde books in the past: Chasing Windmills and Jumpstart the World, both of which I thoroughly enjoyed. This book was no different; it is thoughtful, serious, full of love, and a very good read. The other two were YA lit, but this one is shelved under adult fiction at my local library. Hmmm. It's about a 14 year old boy so I would also count it as YA fiction.

The story is told from Lucas' perspective and about two-thirds of the way through it occurred to me that he is looking back on the past, telling someone else his story. I liked that the book's final chapters are in the present so that we get to know what happens to the characters since I really cared about them.

Lucas, Zoe, Connor, their parents, and Lucas' brother Roy all play important roles in the plot and feeling of this novel, even if they aren't all main players. I don't really want to say too much because it will give away what happens in the book, but suffice it to say that Lucas has a complicated relationship with each of them in their own way. He is thoughtful, caring, overwhelmed, and scared, all of which leads to how he deals with the other characters.

1969 is also an important time for the story to take place; it allows the Vietnam Conflict to have an impact on the characters and to bring out issues that it created for those who fought and those left at home.

This book is lovely even though it is about difficult things. I read well past my bedtime in order to finish it and recommend it highly. And there's dogs that play a major role in the story, what more could a reader want?!