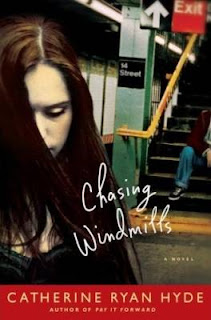 Title: Chasing Windmills
Author: Catherine Ryan Hyde
Genre: YA fiction
Pages: 262
Rating: 4.5 out of 5
Challenges: Reading from my Shelves
FTC Disclosure: I received this book as a gift
Summary (from the inside flap of the book): Both Sebastian and Maria live in a world rule by fear. Sebastian, a lonely seventeen-year-old, is suffocating under his dominant father's control. In the ten years since his mother passed away, his father has kept him "safe" by barely allowing him out of their apartment. Sebastian's secret late-night subway rides are rare acts of rebellion. Another is a concealed friendship with his neighbor Delilah, who encourages him to question his father's version of reality. Son it becomes unclear whether even his own mother's death was a lie.

Maria, a young mother of two, is trying to keep peace at home despite her boyfriend's abuse. When she loses her job, she avoids telling him by riding the subways during her usual late-night shift. She knows her sister, Stella, is right: She needs to "live in the truth" and let the chips fall where they may. But she still hasn't been able to bring herself to do it. And soon he will expect her paycheck to arrive.

When Sebastian and Maria wind up on the same train, their eyes meet across the subway car, and these two strangers find a connection that neither can explain or ignore. Together they dream of a new future, agreeing to run away and find Sebastian's grandmother in the Mojave Desert. But Maria doesn't know Sebastian is only seventeen. (I am leaving out the rest as it gives too much away)


Review: I love the idea of making a difference in someone's life and this book has that and much more. Sebastian is so in need of someone, anyone, to take him away from his current life and bring him out into the world. His dad home schools him and makes him stay in their apartment except to go for a run. He doesn't watch movies, eat "unhealthy" food, and is controlled by intimidation. Then he meets Delilah, an older neighbor, who is wonderful. She is practical, exposes him to the world (pizza, pretzels, Singing in the Rain, and more). She is the mother he needs.

Maria also needs someone to rescue her from her abusive boyfriend. The author did a fabulous job at showing Maria's thought process when she is abused, how she can convince herself that it's her fault, if she had just.... The story also shows a good progression of Maria seeing a way out. But, how does she bring her kids along? How can she leave them behind? These are not easy questions and that is evident in Maria's chapters.

It would be so easy for this to be a sappy love story, especially with the references to Singing in the Rain, West Side Story, and Romeo and Juliet. However, Hyde manages to just skim the edges of overkill and leaves the reader feeling like it is all plausible, not overdone, and real. I thought I knew where the story was going, but in the end I didn't and I like that. 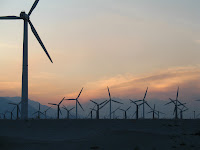 Click to see my updated Google Map. Another book set in New York City! What a fabulous place! Here are other books set in the City that I've read recently:

This one sounds fantastic and I love it that the ending wasn't what you expected!!

Staci--I have now read two of her books and liked them both. The other one was Jumpstart the World

I think I've heard of this one, but I don't remember exactly where. I like it when a story doesn't play out to be a routine love story.

Aths--This is definitely not a typical love story! There is just so much more going on than the romance

I've only read two of this author's books--Pay it Forward and Electric something or other. I loved Pay it Forward but was indifferent to the other. This one sounds more like what I like. Great review!

Jen--I never read Pay it Forward, but really liked the movie. I've now enjoyed two of her books, this one and Jumpstart the World