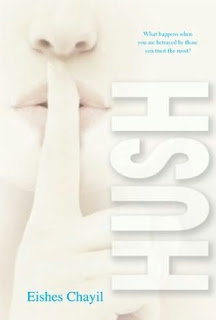 Title: Hush
Author: Eishes Chayil (a pseudonym)
Genre: YA fiction
Pages: 359 (including a glossary)
Rating: 4.5 out of 5
Challenges:
FTC Disclosure: I borrowed this book from my school library
Summary (from the inside flap of the book): Inside the closed community of Borough Park, where Brooklyn's Chassidim live, the rules of life--everything from how to dress to whom to marry--are very clear, determined to the last detail by an ancient script written thousands of years before. Then young Gittel witnesses an unspeakable act of violence against her best friend, Devory, an act hat goes against everything she's been taught as a Jew. For the first time in her life, there are no guidelines to tell her what to do, so she remains silent. But even inaction has consequences, and sometimes they are deadly....

Now a teenager, Gittel is racked with guilt over the choices she made and those that were forced upon her by the community she once trusted. She must question everything about herself--her own innocence, her memories of the past, and the beliefs of her sect--to find peace for Devory and for herself.
Review: This book is important. It deals with issues, with culture, with religion, with social norms, with what is acceptable and what is not and these are difficult issues to write about. The author handles them very well in a story that moves quickly while going back and forth between then (when the act of violence occurred) and now (when Gittel is a teenager).

The beginning of this book is a little tough to read because it includes a lot of Yiddish/Jewish words and there are a lot of references to Ultra Orthodox Jewish practices. However, there is a glossary in the back and the reader needs to get through this first part to get into the story because it's worth it. I learned so much about the lives of Orthodox Jews, their beliefs, and the way they live their lives. The children really are sheltered and the community is very insular and separate from the outside/goy world.

At the age of nine Gittel witnesses abuse against her best friend. When her friend tries to prevent the abuse, Gittel doesn't understand. She knows nothing about abuse, sex, or intimacy so doesn't understand what is happening to her friend. When tragedy strikes (I am trying not to give away too much in this review) Gittel tries to tell adults what happened, but no one will listen; the adults are too embarrassed and worried about what will happen to their family's reputation in the community.

As a teenager Gittel tries again to tell someone about what happened. She is haunted by nightmares and hopes that by talking the dreams will go away. However, the encounter with the world outside her own is scary, unpredictable, and overwhelming. The author does such a great job of showing the "us and them" mentality, the fear of the outside and the unknown.

It would be easy to find fault with this book and say that the author is not being fair to Orthodox Jewish communities and their members. I felt like she was perhaps a little harsh, showing them as super sheltered and terrified of non-Jews. Then I read the author blurb on the flap and the author's note at the end of the book. The name of the author, Eishes Chayil, is a pseudonym and I assume she is using that to shield her identity since she grew up in a community like the one in the book. As a child she witnessed abuse and was told to keep silent.
This book is powerful.
Geography Connection: 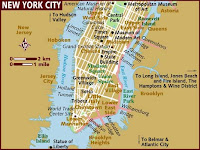 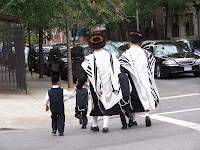 Click to see my updated Google Map. There are references to the Holocaust and survivors in this book, to life in the European homeland, and to life as an ultra Orthodox Jew in New York. It is amazing how insular groups can remain unchanged in our modern world! Here's some books set in New York or about Jewish culture that I have read over the past year:

At 2300+ pages I'm glad you liked it because that's a heck of a committment! It does sound like it has a powerful message behind it though and one that it is well worth reading about.

You are right that this book sounds very powerful. That's a lot of important issues being dealt here, and it's sad that it has its beginnings in a real incident that the author faced. I'm going to look this one up.