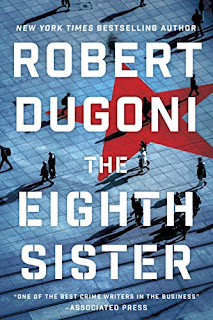 FTC Disclosure: I was given a copy of this book for an impartial review

Summary (from the inside flap of the book): Former CIA case officer Charles Jenkins is a man at a crossroads: in his early sixties, he has a family, a new baby on the way, and a security consulting business on the brink of bankruptcy. Then his former bureau chief shows up at his house with a risky new assignment: travel undercover to Moscow and locate a Russian agent believed to be killing members of a clandestine US spy cell known as the seven sisters.

Desperate for money, Jenkins agrees to the mission and heads to the Russian capital. But when he finds the mastermind agent behind the assassinations—the so-called eighth sister—she is not who or what he was led to believe. Then again, neither is anyone else in this deadly game of cat and mouse.
Pursued by a dogged Russian intelligence officer, Jenkins executes a daring escape across the Black Sea, only to find himself abandoned by the agency he serves. With his family and freedom at risk, Jenkins is in the fight of his life—against his own country.

Review: This is a good book! I planned on reading it over a week since it is long and I had a really busy work week, but I ended up finishing it in three days because I stayed up late to enjoy it.

Ostensibly this is a spy story and I don't read many of those; it's not my usual genre. However, my dad reads a ton of them so I am passing this on to him to read. I'll be interested to see what he thinks of it. I really enjoyed the intrigue, the mystery, the deception, and the family storyline. Charles Jenkins' family and friends figure in this story and they make all of the events seem much more reasonable and normal, which I liked.

It would have been easy to make the Russians the bad guys in this book, especially right now given how things are in the news, but Dugoni managed to make them the enemy, but not, and human. To show both the US and Russia as flawed and forgiving is so important because it is never clear cut.

If you like a good international, CIA / FSB (the new KGB), court room drama book then this one is definitely for you.