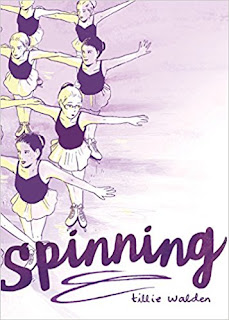 Summary (from the inside flap of the book): It was the same every morning. Wake up, grab the ice skates, and head to the rink while the world was still dark. Weekends were spent in glitter and tights at competitions. Perform. Smile. And do it again. She as good. She won. And she hated it.


Review: I am loving summer and all the great YA reading that I am doing! It also feels good to occasionally read a graphic novel and switch up my reading a bit. I liked the illustrations in this novel and the colors that were used. I think the illustrations enhanced the story, especially since it is about figure skating and the drawings helped me to "see" the spins and leaps in a sport for which I don't know the details.

Tillie Walden's story is a common one in the US: participating in a sport from a young age and getting really serious about it until in your late teens you burn out. Walden did well in her sport--figure skating and synchro skating--but didn't seem happy doing it for many years. She had trouble making really good, deep friendships, and doesn't seem to have had parents that were super supportive. Luckily she found role models in her cello teacher and an early coach. But is that enough?

In addition to questioning her participation in skating, Walden came out to her family and friends at age 15. I think she could have explored this aspect of her early life more, but maybe skating dominated so much that that is what she chose to focus on. I kept wanting her to tell someone how unhappy she was, that she needed emotional support and/or therapy. But I also understand that being a gay insecure teenager in Texas who wants to quit her sport isn't an easy spot to be in.

I think this book has important messages for its teen readers and I hope they can see bits of themselves in the story.