Review: The Girl Who Smiled Beads by Clemantine Wamariya and Elizabeth Weil 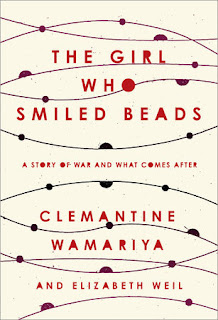 Summary (from the inside flap of the book): Clemantine Wamariya was six years old when her mother and father began to speak in whispers, when neighbors began to disappear, and when she heard the loud, ugly sounds her brother said were thunder. In 1994, she and her fifteen-year-old sister, Claire, fled the Rwandan massacre and spent the next six years migrating through seven African countries, searching for safety--perpetually hungry, imprisoned and abused, enduring and escaping refugee camps, finding unexpected kindness, witnessing inhuman cruelty. They did not know whether their parents were alive or dead.

When Clemantine was twelve, she and her sister were granted refugee status in the United States; there, in Chicago, their lives diverged. Though their bond remained unbreakable, Claire, who had for so long protected and provided for Clemantine, was a single mother struggling make ends meet, while Clemantine was taken in by a family who raised her as their own. She seemed--at least on the surface--to be living the American dream: attending private school, taking up cheerleading, and, ultimately, graduating from Yale. Yet the years of being treated as less than human, of going hungry and seeing death, could not be erased. She felt at the same time six years old and one hundred years old.


Review: I chose this book from Book of the Month Club and could have sworn it was a fiction book so imagine my surprise when page one told me otherwise! While I am no stranger to reading books about the horrors humans perpetrate upon one another and stories of refugees, this book is important to read as it provides another perspective, that of a child who makes her way in the world, does extremely well for herself, but still hasn't quite dealt with all that she has experienced.

An important aspect of Clemantine's story and message is that we shouldn't see her as a victim. She and Claire were strong and resourceful throughout their harrowing journey, never compromising their basic principles, and always making decisions that kept them safe and moving toward a better life.

This book, as with others that tell "similar" tales, reminds me of the inhumanity in the world. Unfortunately, it reminds me of the horrible attitudes that see to be becoming more and more acceptable in the United States under our current president.