Review: A Night Divided by Jennifer A. Nielsen 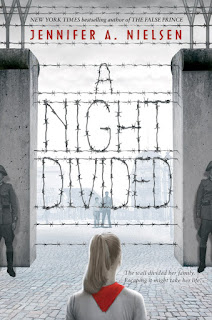 Summary (from the inside flap of the book): With the sudden rise of the Berlin Wall, twelve-year-old Gerta finds her family divided overnight. She, her mother, and her brother Fritz live on the eastern side, controlled by the Soviets. Her father and middle brother, who had gone west in search of work, are unable to return home. Gerta knows it is dangerous to watch the wall, to think forbidden thoughts of freedom, yet she can't help herself. She see the East German soldiers with their guns trained on their own citizens, watching for any sign of escape. Gerta, her family, her neighbors and friends are prisoners in their own city.

But one day, Gerta spots her father on a viewing platform on the western side of the wall, pantomiming a peculiar dance. She concludes that her father wants Gerta and Fritz to tunnel beneath the wall, out of East Berlin. However, if they are caught, the consequences will be deadly. No one can be trusted. Will Gerta and her family find their way to freedom?


Review: When I lived in Bonn, West Germany (yes, there were still two Germanies) we spent time in West and East Berlin. Crossing into East Berlin was surreal, like entering a previous decade. A grey, dreary decade. I also visited the museum at Checkpoint Charlie that shows the stories of the people who tried, some successfully, to escape from East Berlin. We also stood on observation platforms, just like Gerta's dad. I have been meaning to read this book since it was released three years ago and am so glad I finally did.

This book has a good story, one with historical interest and accuracy, East German / communist culture, tension, family, sacrifice, and tension (yes, tension twice). We are in on every detail of Gerta and Fritz' plan to escape, the role of the Stasi and every day citizens in spying on neighbors, and what people are willing to do for freedom. It makes me think of the immigrant families who are currently being separated at our borders. Like them, Gerta and Fritz take risks and are willing to sacrifice in order to leave their living hell behind.
Challenges for which this counts: none