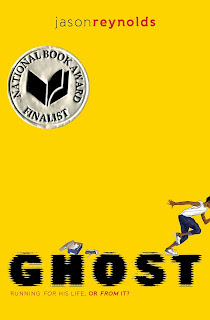 Summary (from the inside flap of the book): Ghost wants to be the fastest sprinter on his elite middle school track team, but his past is slowing him down in this first electrifying novel in a new series from Coretta Scott King/John Steptoe Award–winning author Jason Reynolds.
Ghost. Lu. Patina. Sunny. Four kids from wildly different backgrounds with personalities that are explosive when they clash. But they are also four kids chosen for an elite middle school track team—a team that could qualify them for the Junior Olympics if they can get their acts together. They all have a lot to lose, but they also have a lot to prove, not only to each other, but to themselves.Running. That’s all Ghost (real name Castle Cranshaw) has ever known. But Ghost has been running for the wrong reasons—it all started with running away from his father, who, when Ghost was a very little boy, chased him and his mother through their apartment, then down the street, with a loaded gun, aiming to kill. Since then, Ghost has been the one causing problems—and running away from them—until he meets Coach, an ex-Olympic Medalist who sees something in Ghost: crazy natural talent. If Ghost can stay on track, literally and figuratively, he could be the best sprinter in the city. Can Ghost harness his raw talent for speed, or will his past finally catch up to him?

Review: Jason Reynolds is on fire right now so I was really looking forward to reading Ghost. I previously read The Boy in the Black Suit and All American Boys, both of which were fabulous.

This is a really quick read because it is aimed at middle/junior high school kids, but I enjoyed it and I am a grown up. :-) Ghost is a kid I can sympathize with even though he made me so mad as I read this story. His life isn't easy (dad in jail, mom working full time, living on the super poor side of town, etc), but he definitely adds to his own drama and pain with his attitude and actions. This is like so many young people.

But, like many young people, Ghost is given a chance to change his life through sports and an amazing coach. Coach is a great character as he is like so many people who give their time, energy, and yes, money to help out kids who really need it. Now all Ghost has to do is accept the love and support he is getting from his coach and teammates.

The book ends on a super cliffhanger moment, but not a scary or sad one. It makes me want to read the next installment, Patina.

Email ThisBlogThis!Share to TwitterShare to FacebookShare to Pinterest
Labels: 4.5 Stars, Sports, YA