Review: The Boy in the Black Suit by Jason Reynolds 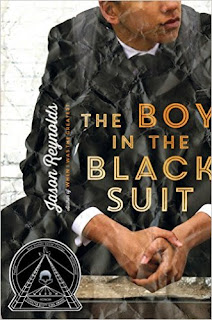 Summary (from the inside flap of the book): Even Matt's best friend wants to know what's up with the black suit. Matt's been wearing it every day since his mom passed away, but that's not why he's wearing it. He just got a gig at t he local funeral home--hey, don't judge, it pays a helluva lot more than the Cluck Bucket; thirty bucks a day. Not bad. But everything else basically sucks. Folks say you don't miss something until you don't have it no more. And that's real. But then Matt meets Lovey. Yeah, crazy name. And she's been through more crazy than he could ever imagine. But this girl won't cry, even thought she should. And maybe that's why Matt is so drawn to her--why he can't seem to shake her. Because she's...tough. Tough the way he wants to be...I know, weird.

Review: I have read one Jason Reynolds book before, All American Boys, and liked it. A friend also recommended that I read a Jason Reynolds book. And, this book was an honor book for the Coretta Scott King Award for 2015, so here are are. This book kept me entertained and distracted on two flights today (Santa Barbara to LA and LA to Sacramento)!

I found the main character, Matt Miller, to be extremely likable. He is an all around good guy without being "too good." He likes to cook, but can't since his mom died. He likes his dad, but not when his dad drinks. He likes a girl, but he's a bit shy to approach her. He does well in school, but doesn't know where he wants to go to college. He has a best friend with whom he is honest and comfortable. Like brothers. And he likes working funerals. Seeing other people's pain and sorrow helps him figure out his own. It's a really interesting concept and I enjoyed that part of the story.

This book is important and I hope this doesn't come off the wrong way. I think it's important to have an African-American male as the protagonist and the story isn't about gangs, drugs, guns, jail, or drop outs. Matt is just a guy dealing with loss, grief, and finding his way back to the now.

Challenge for which this book qualifies:

Email ThisBlogThis!Share to TwitterShare to FacebookShare to Pinterest
Labels: 4.5 Stars, challenge 2017, YA