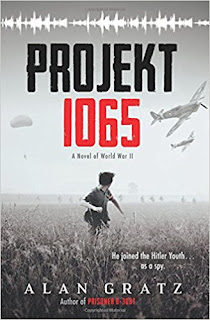 Summary (from the inside flap of the book): Infiltrate. Befriend. Sabotage. World War II is raging. Michael O'Shaunessey, originally from Ireland, now lives in Germany with his parents. Like the other boys in his school, Michael is a member of the Hitler Youth.

But Michael has a secret. He and his parents are spies.

Michael despises everything the Nazis stand for. But he joins in the Hitler Youth's horrific games and book burnings, playing the part so he can gain insider knowledge.

When Michael learns about Projekt 1065, a secret Nazi war mission, things get even more complicated. He must prove his loyalty to the Hitler Youth at all costs--even if it means risking everything he cares about. Including... his own life.

Review: I have been in a major reading slump for about 3 months and was hoping that reading a quick YA World War II book would help snap me out of it. I read this book in one day so maybe I am coming back my old reading habits.

This book is definitely one that I think junior high and younger high school students would enjoy, boys in particular. It is full of action (think a mini-Forrest Gump), intrigue, and history told well. Michael is likable, smart, and brave, but also manages to admit his failings and fears, which endeared him to me.

The boys in his Hitler Youth group are awful. But you can see how they got there as well, which I think is important. They weren't bad people to the core, but had been convinced by a powerful and effective propaganda machine that they were more deserving than others and that they should rule with fear and violence. Insult or be insulted. Beat or be beaten. Kill or be killed.

I also really liked the Author's note at the end that explains the real history behind the novel. I think it's so important for young people to read historical fiction because it makes history come alive.