Review: The Lines We Cross by Randa Abdel-Fattah 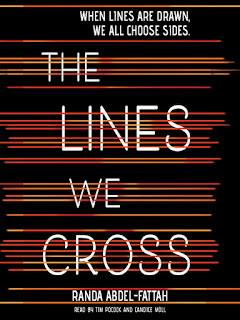 Summary (from the inside flap of the book): Michael likes to hang out with his friends and play with the latest graphic design software. His parents drag him to rallies held by their anti-immigrant group, which rails against the tide of refugees flooding the country. And it all makes sense to Michael.

Until Mina, a beautiful girl from the other side of the protest lines, shows up at his school, and turns out to be funny, smart--and a Muslim refugee from Afghanistan. Suddenly, his parents' politics seem much more complicated.

Mina has a long and dangerous journey fleeing her besieged home in Afghanistan, and now faces a frigid reception at her new prep school, where she is on scholarship. As tensions rise, lines are drawn. Michael has to decide where he stands. Mina has to protect herself and her family. Both have to choose what they want their world to look like.

Review: This novel seemed so timely and I enjoyed Abdel-Fattah's other book that I read (Does My Head Look Big in This?) so I couldn't resist buying it as one of the books to pull me out of my reading slump. What a good choice!

With all the nasty political rhetoric being thrown around in the US these days this book fit right in. The way that Michael's parents feel about refugees coming to Australia sounds very like the way Trump and his supporters feel in this country. It makes me sad to think that people are so scared of the "other" that they will go to extremes to get rid of them. I don't want to give away any of the plot, so I won't elaborate on that.

Somewhere near page 300 I felt that this book was going to be too long, it needed to pick up the pace and get the story progressing and the next thing I knew I had read the final 89 pages and I was done! So, it lagged a for about 30 to 40 pages, but otherwise had a good story and characters that I like.

Mina is a good main character; she is bright, thoughtful, and though she has had a tough life, she gets on with it. She doesn't wallow in her past, but rather uses it to urge her to success. Michael is struggling with his parents' racist views, trying to figure out what he believes and wants in life. That's difficult to go against everything you've heard in your house from a young age. To go against one's parents takes time and this story shows that.

I also like the message the novel gives that speaking up for what you believe, whether it's poplar or not, isn't easy, but it's important.

Email ThisBlogThis!Share to TwitterShare to FacebookShare to Pinterest
Labels: 4 Stars, challenge 2017, YA