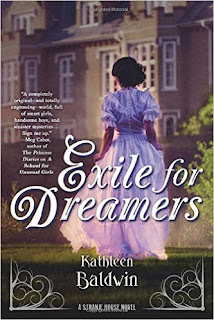 Summary (from the back of the book): It's 1814. Napoleon has escaped his imprisonment on Elba. Europe is in shambles. Britain is at war on four fronts. And at Stranje House, a School for Unusual Girls, five young ladies are secretly being trained for a world of spies, diplomacy, and war.

Tess Aubreyson can't run far enough or fast enough to escape the prophetic dreams that haunt her. Dreams bring nothing but death and grief, and Tess refuses to accept that she may be destined for the same madness that destroyed her mother. Until her disturbing dreams become the only means of saving Lord Ravencross, the man she loves, and her fellow students at Stranje House. Tess' old friend, the traitorous Lady Daneska, and Ghost, the ruthless leader of the Iron Crown, have returned to England, intent on paving the way for Napoleon's invasion. Can the young ladies of Stranje House prevail once more? Or is England destined to fall into the hands of the power-mad dictator?

Review: Another fun YA series. I enjoyed the first book, A School for Unusual Girls, and like that each book in the series will be told from a different girl's perspective as the story progresses. Tess is our narrator in this book and she is strong. She runs daily (remember, it's 1814 so she runs in long dresses), is skilled with a knife, scales walls, and feels the need to protect the man she loves. But the poor thing also has these disturbing dreams that foreshadow events to come. But they are bizarre dreams: being stung by hundreds of golden bees signifies Napoleon (he had bees as his symbol).

The romance between Tess and Gabriel is sweet and honest, but I do wish they had chosen different covers. I am not a "romance novel" cover person. When to me the interesting thing about this series is that the girls are strong and independent, the covers suggest light and fluffy.

What's fun is that the books are an alternative history. What if Louis XVIII had been assassinated? What if Napoleon did actually attack the western coast of England? What if a group of young women was trained spy for and to protect Britain? Suspend what you know of actual events and enjoy the speculation. And in the afterword, the author explains how this fits into real history, which is good.